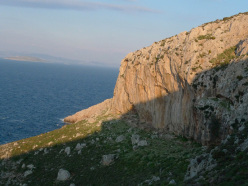 SECRET GARDEN by Aris Theodoropoulos
With stalactites growing horizontally out of the red, slightly overhanging cliff face, Secret Garden is a cross between Odyssey and Ghost Kitchen. The climbing is exceptional, with a mixture of tufa jugs and single pipes and with plenty of opportunities for knee bars and sit-down rests. Secret Garden is in a remote and wild area on the north coast of the island; it is very close to the sea and it overlooks Leros Island, the islets of Pitta, Kalolimnos and Imia, and Turkey’s east coast. .

SAINT PHOTIS by Simon Montmory
Saint Photis was first bolted by the Remy brothers in 2001 and still had a huge potential for new lines. In autumn 2012 Simon Montmory equipped 15 new routes and in spring 2013, together with Aris Theodoropoulos, they re-bolted the old routes to make another new and attractive sector on the island. The sector is very quiet and wild, with a fantastic view on the south face of Telendos and the sea. It’s ideal to get away from the crowd and closer to nature! The grades might be a bit harder or easier, since only few climbers repeated the routes. Alexander Megos made the first ascents of all the hardest routes, with really humid conditions and generally one or 2 goes… and of course very easily! Bravo Alex!