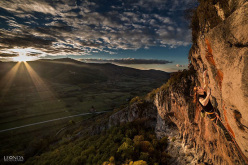 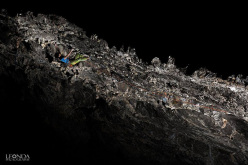 At Slovenia’s top sports crag Misja Pec Mina Markovic has made a 3rd go repeat of the 8c+ Histerija, while at nearby Osp Sachi Amma has made a 4th go repeat of Water World 9a.

Exactly like Kranj acts as the traditional final stage of the Lead World Cup, for many athletes the nearby crag Misja Pec acts as a traditional outdoor meet in the days immediately after the climbing competition. Many climbers remain in Slovenia to test themselves on this limestone outcrop which, together with the massive nearby cave Osp, is without a doubt one of the most important crags in the world. Finally free from most competition obligations, sends are both fast and furious.

Last Sunday Mina Markovič, after having won the stage at Kranj and also her third overall Lead World Cup victory, made short work of the 8c+ Histerija. This is Markovič’s second route of these difficulties, after having redpointed Mind Control at Oliana at the end of 2014. The 27-year-old needed just three attempts… this remarkable speed foretells that in the immediate future there could be, there should be rather, something even harder.

Sachi Amma made the best use of the Slovenian stage - the only leg he competed in this year, during which he placed a respectable 9th, first excluded from the finals - by repeating Water World on his 4th attempt. This long 9a had been freed by Klemen Bečan in the massive Ospo cave in 2014 and repeated by Domen Škofic only. As many know, the Japanese climber had aimed to climb 9a’s this calendar year but since he reached this objective at the end of October, he raised his expectations even higher. Quite frankly we’ve lost count of what he’s climbed in the meantime, and to find out more we’ll wait for the traditional end of year balance sheet.