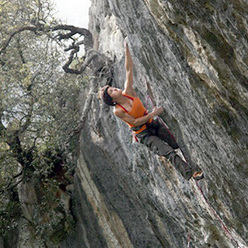 Irati Anda has climbed her first ever 8c, 'White Zombie' in the Baltzola cave in Northern Spain.

Irati Anda has just climbed her first ever 8c, "White Zombie" in the Baltzola cave in Northern Spain. In doing so the 25 year old Basque climber joins the rapidly growing list of woman who have sent 8c and is obviously enjoying the form of her life - just a few weeks ago she also sent two 8b's, "Sugoi" and "Ongi etorri" at the massivlely steep Baltzola cave. Sounds like great training for the third Dima Rock Master which will take place there at the start of June!

As many will remember, White Zombie shot to fame in 2004 as it became the first 8c in the world to be on-sighted, by none other than Yuji Hirayama of Japan.