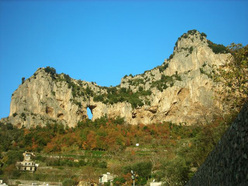 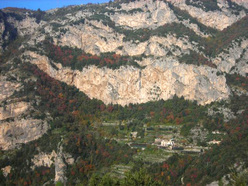 Climbers have whispered about the sport climbing potential on the enchanting Amalfi Coast for many years. Cristiano Bacci now reveals the secrets around Montepertuso, close to Positano.

In March 2008 works on one of the most important climbing areas in the south of Italy came to an end. The initiative had been promoted by the Association La Selva in 2004 and carried out with the Positano town council, which immediately supported the idea of exploiting the marvellous rock faces to create an open air gum which has few equals in southern Italy. The initiative was financed by the Amalfi Coast Mountain Development Board and was supported by the European Comunity.

Starting from the town square in Montepertuso, circa a dozen crags and over 200 routes have now been established. The morphology of the rocks often forced the route setters to equip ground-up through the steep, tufa lined overhangs. Particular attention was given to easy routes as the idea is to transmit this vertical passion to the local children, as the future of this Italian Kalymnos lies in their hands.

The initiative proved to be a success right from the outset, word soon spread and some of the strongest climbers in Italy visited these crags to free a handful of extraordinary routes. The potential is still enormous and many routes still await the first ascent.

The climbing center is "La Selva", an association which represents the prototype of earthly paradise for climbers. Welcoming and not too expensive, it is one of the few houses in the world which can boast enormous crags in its front garden... some of these are worth the journey south in their own right!