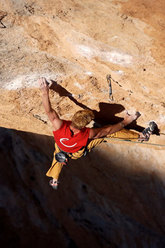 On 02/05/07 Andreas Bindhammer from Germany made the fourth ascent La Rambla 9a+, Siurana, Spain

On 02/05/07 Andreas Bindhammer from Germany made the fourth ascent of Siurana's famous testpiece, La Rambla 9a+. Four days later he also repeated the nearby Broadway 8c+/9a in just three attempts.

La Rambla was first ascended by Alexander Huber in 1994 up to a pocket at 3/4 height, and extended in 2003 by Ramon Julian Puigblanque to get its 9a+ grade. It was repeated only last year in quick succession by both Edu Mari­n Garcia and Chris Sharma.

Andreas, who needed roughly 2 weeks to repeat the 95 move stamina fest, recounts the successful redpoint as follows: "It was almost unreal.. That day it was really cold, circa 14Â°C, it was humid and I could even see my breath when I got out of the car. The first attempt was good but not really promising, so I was surprised to catch the undercut. The shouts from nearby climbers encouraged me more - at this point I really had to give it everything. I had just optimised the move into the two finger pocket, finding out that I had to stand more sideways to stop swivelling out. When I stuck the pocket that I had failed twice to hold in best conditions, I then climbed the rest like in a trance. Even the climbers on the other side of the valley had stopped to fire me up the final meters. When I reached the chain I felt incredibly relieved and free. I'd never thought that I'd manage it just then...!"

How does it compare to Abysse, the 9a/a+ in France's Gorges du Loup you repeated in October 2006?
"In truth it's difficult to compare these two routes as the character of the routes is very different. Abysse requires extreme stamina, has no true restpoint and is about 40 moves long. It takes circa 5 - 6 minutes to climb. And tufa-climbs are right up my street. La Rambla has hard sections with extremely difficult single moves, but also good rests. The crux comes after 80 moves, and the route totals 95. It takes circa 25 - 30 minute to climb. I'm not that good at bouldery routes, especially since the moves are reachy.
I have the feeling that for me personally both routes are roughly the same grade since the effort needed to climb them is similar. Add to this though that La Rambla is mentally harder due to its length, since you reach the crux after circa 20 minutes and have already climbed a solid 8c. However different these two routes may be - they are both the most fascinating lines I've ever climbed."