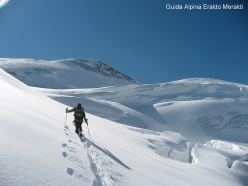 Classic route from the Vedretta di Cedec: From Rifugio Forni follow the easy trail which initially ascends two steep hairpin bends, then it levels out to he right to circumvent the ridge and enter Val Cedec. Continue gently to reach the Pizzini hut. The track is always beaten and the route is both simple and obvious. From here continue NE to almost the start of the cable used to transport gear  to Rifugio Casati. Just before this turn right, eastwards, traverse below the obvious line of rocks that leads to Monte Cevedale. Keep to the left of the glacier and reach the wide plateau at about 3200m. Head east, ascend the steep slope and exit to the right to follow the dip that leads to the final plateau above. This gradually leads to the base of the steep slope; cut diagonally across this to the right and you reach the lower pre-summit on the NE Ridge. The summit is now reached more easily where the cross awaits. Ascent time : 3- 5 hours depending on snow conditions. Altitude difference: 1591m Orientation: S-W-NW-N

Descend down the ascent route. 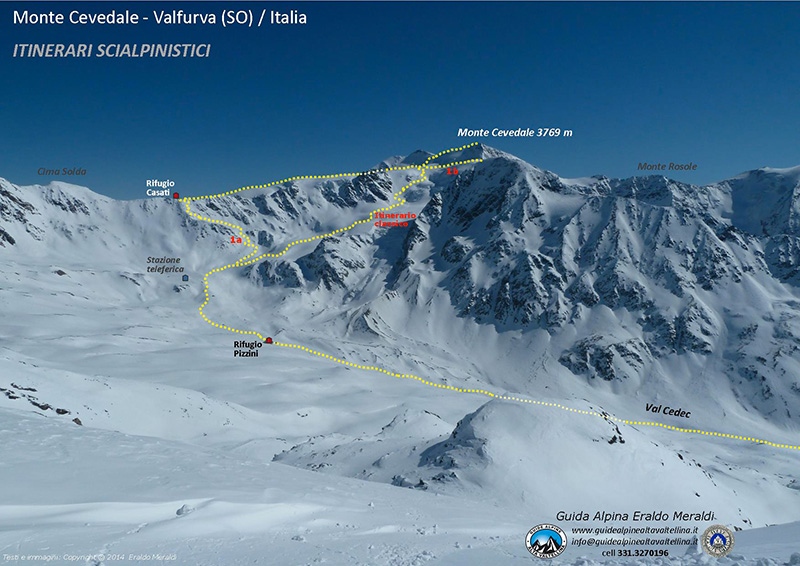 From the start of March to mid May.