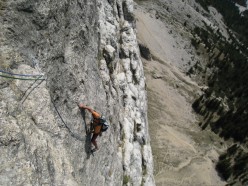 Exciting climb up excellent rock. The second half is vertical and exposed and ascends yellowish-black pocketed rock and the final two pitches, in particular, are extremely beautiful.  After a second difficult pitch, the difficulties tend to be in the 6b region. You can abseil quickly off the route (two 60m ropes) following the abseils marked on the topo.

From the car park walk up the path which leads to the base of the mountain. Via Roberta 83 begins in the middle of the face, circa 30m to the left of Via Micheluzzi, and the route name is marked at the base. As you walk towards the face, aim for the horizontal roof 50m above the base.

5 abseils or walk down via the ledge Cengia dei Camosci.

12 quickdraws. Single rope if you do not intend to abseil off.

On the slab on pitch 6 climb to the right of the bolts. If you climb directly the route becomes 7b+/7c.

Rebolted byAlberto De Giuli and Renato Bernard (G.G.A.A.) in summer 2009. Thanks to Val di Fassa Climbing for having provided the gear.

COMMENTS for the route "Roberta 83"

No comments found for Roberta 83