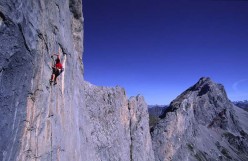 Silbergeier is a fantastic route in a marvellous position. The route is perfectly vertical and offers super technical face climbing on small edges and microscopic footholds. The moves are hard to decipher, especially the first time on the route which is certainly also the most demanding.

Excellent finger strength is required more than pure muscle strength and, above all, excellent footwork to get to grips with this type of climbing. The bolts tend to be run-out but never excessively, and with some dynamic belaying (highly recommended) the falls tend to be in the region of 10m.

The only dangerous section (20m fall in a dangerous position) is at the end of the 5th pitch on easier terrain (if you reach this then you are definitely far more capable than the difficulties required).

The route starts on the slab at circa half-height on the IV Kirchlispitze. Two fixed ropes lead to the start of the climb. Ascend the one on the left with jumars and use the one on the right to abseil back down. Check the quality of the ropes (4 abseils with 60m ropes).

Abseil down the route, 60m abseils.

Two 60m ropes, 9 quickdraws, some twistlock carabiners for the belays and plenty of skin for your fingers. Not recommended: a Grigri (too static for long falls), single rope (too dangerous for such abrasive rock). If the second wants to climb (and not just ascend with jumars) take a thin rope to recuperate the rucksack.

COMMENTS for the route "Silbergeier"

No comments found for Silbergeier

From June to October. July and August can be too hot. The best months are June (snow may still be at the base of the route), September and October. The Rätikon is located in a rainy area of the Alps and often climbers fail to even see the mountain.