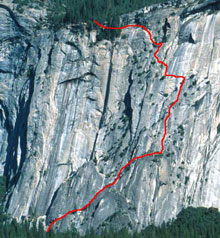 With the major Valley spires climbed, the pioneers of the 30's turned to the unclimbed faces. Climbing Half Dome and El Capitan was unthinkable. The 1400-foot Royal Arches, however, was covered with just enough features and ledges to forge a route.While the first part followed large, 4th class ledges, the upper half of the route looked more challenging. The first difficulty, encountered halfway up the wall, was a 10-foot blank section that was overcome by using a "swinging rope traverse." Even today, 99 percent of climbers pendulum rather than free climb the desperate 5.10b slab moves. A few pitches later, the climbers encountered the second major difficulty: a gap separating the major features. Miraculously, a dead tree trunk had formed a perfect, albeit terrifying, bridge. This feature, dubbed "The Rotten Log," sadly departed from the wall in 1984, removing the most classic and frightening part of the climb. Not to worry, the route still has plenty of exciting sections, most notably the last pitch. Here, with the easy walk-off agonizingly close, the team faced a 50-foot blank section covered in pine needles. Pushing the limits of friction on polished granite with tennis shoes, the first ascentionists pulled through a section that dismays many present-day climbers using shoes of sticky rubber.

2 hours down the North Dome Gully or take the rappel route.

COMMENTS for the route "Royal Arches"

No comments found for Royal Arches