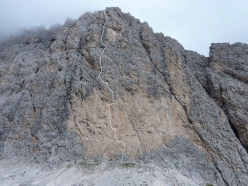 Nuvole Bianche was first ascended after 3 attempts, two in 2014 and one in 2016. The hardest part of the route are definitely the first three pitches through the yellow section, that requires good degree of fitness. We returned in 2018 to free the climb, because we used some aid on pitches 2 a 3 during the first ascent.

From the Col Raiser cable car mountain station follow signs towards the Sas Rigais Via Ferrata. pass below the Piera Longia tower and continue eastwards along the undulating Ncisles meadows. From there ascend towards "Val dall'Ega", the valley between Sas Rigais and Sas dla Porta. Once past the first steep section the wall springs into view. A sling in a thread marks the start of the route 1.5 hours

Descent via the South Face of Sas dla Porta, on foot past grass-covered rocks and down-climbing some sections (Grade II - III). Descend down the south face for circa 350, on the right in order to reach a very thin, prominent pillar. From this pillar descend the gully down the West Face and return to Val dell'Ega. Approx. 1 hour

COMMENTS for the route "Nuvole Bianche"

No comments found for Nuvole Bianche 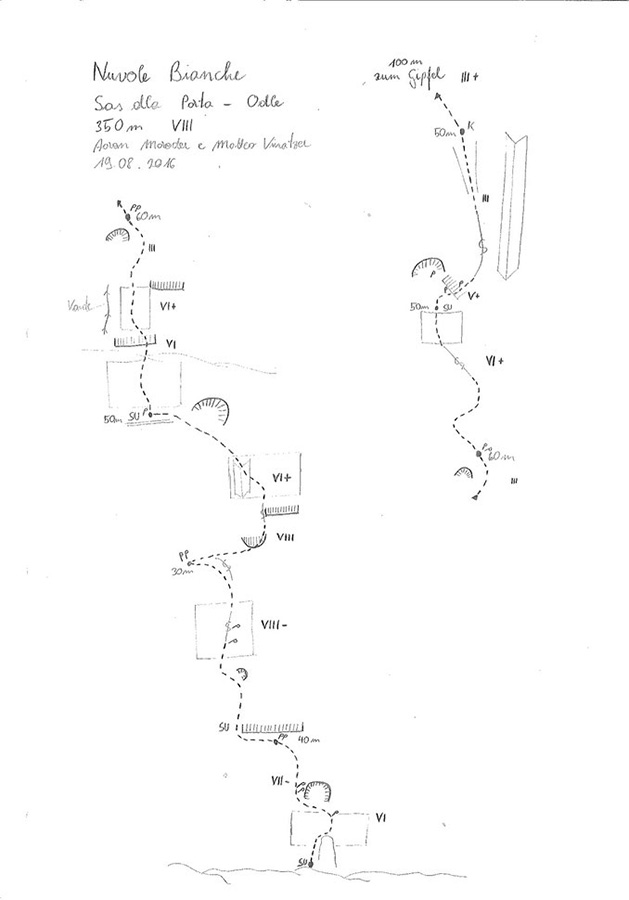