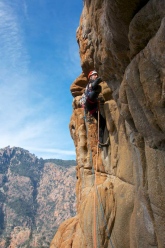 A beautiful steep route on orange granite, mainly on gear (14 bolts total). Exposed and sustained climbing on slopers and cracks. Comfortable belays after pitch 3 (P3). The route can be linked with the original classic Enterre mon coeur to top out (450m of climbing).
First ascent : Jeff Arnoldi and Arnaud Petit in three days of march 2014, finishing the job started by Arnaud and Stéphanie Bodet in October 2013 (P1 and P2). The route has not been freed yet. The grades given a possibly soft.
This is the third route up the West face of the Cascionu, after Enterre mon cœur (1990-1994, a bold incursion initiated by Jean Toussaint Casanova and Pierre Pietri) and Syncope (by a crew led by Vlado Linski in 2007-2008). To the right of the main wall is also A Ringrazia by Jeff Andreucci, Estelle Bord and Carlos Ascensao.
The finish through Enterre mon cœur is highly recommended, featuring a great 50m 7a+ (although the presence of numerous rusty bolts next to welcoming cracks can be disturbing) and a satisfying finish to the summit (cf. the excellent French/English Guide « Grandes Voies Corses » ). We have changed the belays to allow a safe retreat and a convenient way down.

Porto Region (West of Corsica, France).
Approach : 1 h.
Park by the bridge 2 km Est of Ota (Porto commune).
The West Face of the Cascioni is visible from the south end of the bridge.
Follow the right bank of the river Lonca for 5min, take a left by a dead chestnut tree, following yellow marks soon leading to a wider trail. Follow the later for about 20min, passing a rocky field towards the river, then away from it and back. Cross the river 30m after a sandy bank and a massive chestnut tree. The trail then goes right before leading up towards the wall. Leave the trail 50m after a first oak tree (30m before a second one) and scramble up towards the base of the route.

P1: 50 m, 6c+ *
Loose rock but safe gear in the hard section. Start without protections up 20m of easy terrain towards a slab (one bolt). Climb though it (Enterre mon cœur goes left) and then up the corner (3 bolts). The belay is on the obvious slab up left.
P2: 40 m 7a+ or 7b ***
Commiting and technical face climbing. Start up a weird chossy corner (place two small cams before the bolt). Climb left towards a small roof under which it is possible to place some gear before committing into the slab towards a bolt. Pass the bolt (crux) and make it to a large flake, sitting on a ledge. Go carefully around this flake from the left to reach an easy corner. From there, follow the cracks towards the belay (the second C#2 is only useful for this last section).
P3: 40 m 7c+ maybe 8a ****
World class. Hard face then classic roof climbing on gear. Exhilarating finish. Mind the rope-drag.
Start up a crack above the belay, place a C#3 if you have it, and proceed though 15m of sustained face climbing (5 bolts). Under the obvious roof, place some cams and climb slightly to the right using a crack towards a flake (one pre-placed nut). Place a C#0,5 (or smaller) and fire through the lip and into the final wall (7m to the ledge).
P4: 30 m 7c maybe 7c+ ****
Steep sustained climbing on slopers and cracks.
Place a small cam just above the belay to reach the first bolt. Follows a hard section (3 bolts total) leading to a small bulk in which it is possible to place some small cams. Mantle past it to a ledge (rusty piton). Go left (1 bolt) towards the « radiator » easy to protect but hard to climb (final crux).
P5: 35 m 7b+ ****
Climbs though a series of steep walls on slopers. Superb and committing.
Traverse 5m to the left before heading strait up for 15m. After about 10m an Al-g or T-b is essential to protect the first committing crux, leading to a ledge. Traverse right until standing right above the belay. Climb strait up, placing some safe gear before commiting into the head wall (crux). The last section is easer and leads to the left of the « nose ».
P6: 35 m 6c+ ***
« The nose ». A short section on inverted flakes leads to the pillar above the nose. Build a belay just before the grassy ledges or use the rappel anchor on the left (note its location for the way down).
P7: 50 m 5c *
Scramble towards a steep corner on the right. Climb past the rappel anchor towards a large tree on the main ledge.
P8 to P12 : Enterre mon cœur
P8 *, 6a, 10 m to the right of the tree, a fractured corner (small cams, one rusty piton) leads to the start of P9.
P9 **** 7a+, 50 m. Beautiful pitch on rusty bolts. A few cams can be useful (C#0,75 C#1 ). The rappel anchor is on the left of the ledge.
L10 ** 30 m spits, 7a+ maybe 7b. Bolted.
L11 *** : 40 m, 6b+ then 5c. Bolted.
L12 ** : 40 m, 6a, Bolted.

50 m rope, quick-draws, many slings to avoid rope-drag.
Two complete racks from the blue Alien (Al-b) to Camalot #2 (C#2). Three Al-y or Yellow Totemcam (T-y). The smallest Alien and one C#3 can be useful. 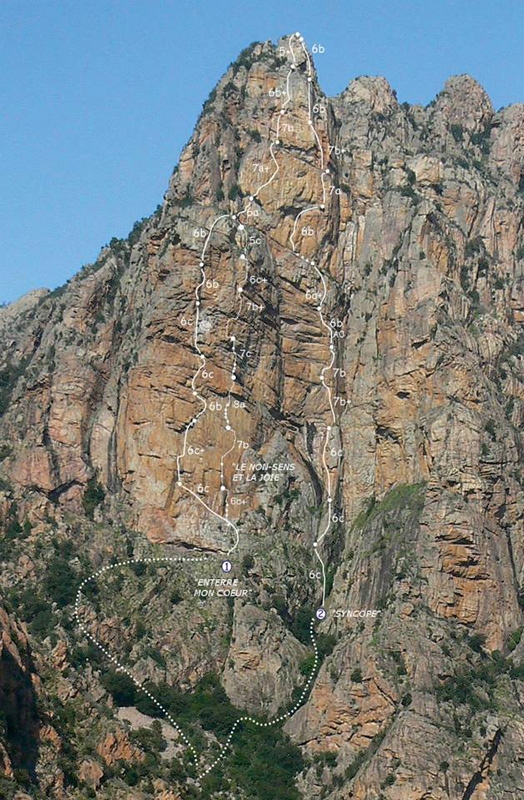