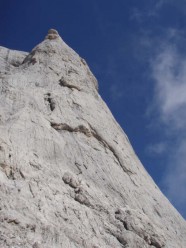 The blank looking East Face of Naranjo de Bulnes is an intimidating yet inspiring objective.  Early starts are recommended as it’s easy to underestimate the length of the routes on this face.

Refuge Urriellu (1950m) is the best base for all climbing on Naranjo de Bulnes.  It is reached either from Fuente De cable car in about 3 and a half hours, or from the village of Sotres in slightly less time, but slightly more height gain.  Those with older cars, may be able to ‘bounce’ their way slightly higher up the track to reduce the walk in though!

From the Refuge Urriellu follow the small path that traverses around the North East Spur of the Tower and up into the ‘Canal de la Celada’.  The East Face is clearly visible above you now.  Various small paths lead you to the base of the face.  The large ‘Y’ flake helps to locate the start. This takes approximately 45 minutes from the Hut.

Abseil descent either next to La Cepeda or, if following East ridge to summit,  take South Face Direct abseil descent.

A full mountain rack is required.  Some bolted belays exist, as well as some pegs en route.

The main difficulties are reserved for the upper pitches but not sustained.  It is possible to traverse through a cave into the amphitheatre on the south face after the upper section instead of continuing to the summit.

COMMENTS for the route "La Cepeda"

No comments found for La Cepeda