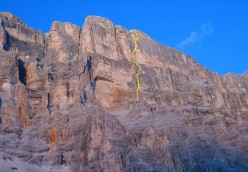 Silberschrei starts 20m to the right of Diedro Mayrl and takes an independent line immediately tp the left of Perla Preziosa, the route first climbed by Nicola Tondini, Nicola Sartori and Michele Zandegiacomo in 2006. After a first easy pitch the crux kicks in at 7c, after which another two pitches of 6c and 6b respectively lead to the ledge roughly at half-height. The final 20m up to the ledge are shared with the more recent Perla Preziosa and both share the same belay on the ledge.
From the ledge Silberschrei breaks off left compared to Perla and after another 7c crux pitch the two run parallel to the summit, on better rock compared to the pitches below. The entire line up this "legendary mountain face" is protected by a mix of pegs and trad gear and according to Auer the climbing is "demanding, at times up slightly friable rock, but definitely worth repeating."

From Santa Croce (2045m), beneath Sass dla Crusc, follow path no. 7 that leads beneath the mountain past scree slopes and alpine meadows up to the ferrata. The path initially leads over scree to then climb up rightwards. Leave the path at this point following a track (cairn markers) up the long outcrop to the base of the wall proper. Various tracks lead to the route at this point: traverse left at the end over the final outcrop and scramble up scree towards the base of the large corner. The route starts 20m right of "Diedro Mayerl".

COMMENTS for the route "Silberschrei"

No comments found for Silberschrei 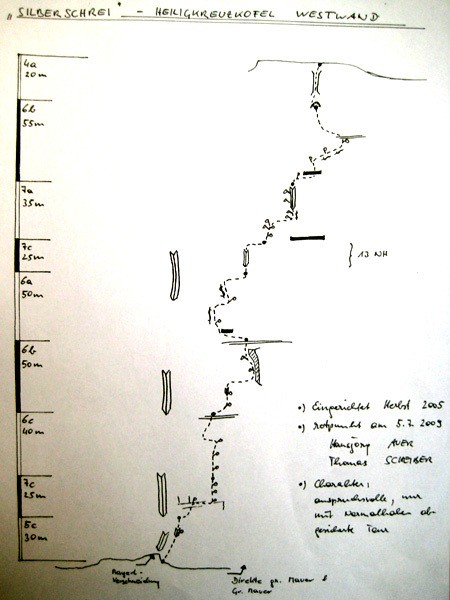