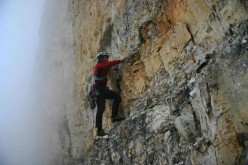 At the start of July 2007 Mauro Bubu Bole from Trieste made the first free ascent of Donnafugata, the 750m route first ascended by none other than Christoph Hainz and Roger Schäli in summer 2004 up the massive vertical bastion on the S Face of Torre Trieste.

Bubu needed five days to free this "fantastic" route which had been first ascended with the use of bolts because, as Hainz had declared, it would have been simply impossible without. Bubu worked the route for four days at the start of July with Ines Papert from Germany but, since she was otherwise engaged, climbed the route on 4 August together with Gabriele Gorobey in a 13 and a half hour push.

Bubu, who led all pitches free straight off, describes the route as follows: "Donnafugata is a great line up an even face which is even greater than it seems. The route is well protected with bolts and pegs, the belays are safe and perfect for a quick retreat (a sign of maturity!). Just a few camming devices are needed for the first 4 pitches, as is that sensibility to climb up friable rock which comes about after years of experience. Powerful climbers beware! And you also need a capable partner (like I had) and stamina and motivation to climb it all in one day! Ah, I forgot... really tight climbing shoes for the crux 15th pitch."

Abseil down the normal route.

Some camming devices for the first 4 pitchs, full set of quickdraws (the route is protected by pegs and bolts)

COMMENTS for the route "Donnafugata"

No comments found for Donnafugata 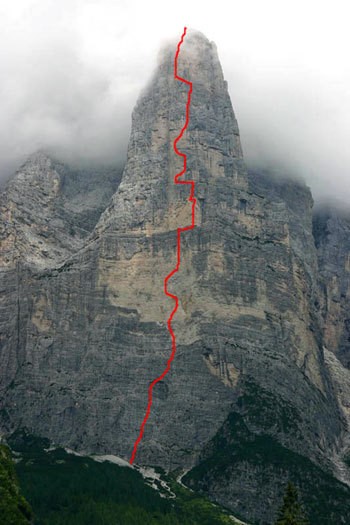