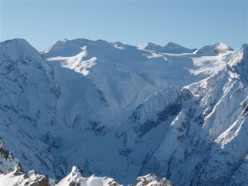 What can be said about one of the most famous ski touring trips in the Alps? A mere 400m ascent is followed by a more than 2000m descent, and on busy Sunday's during March and April there are literally hundreds and hundreds of passionate mountaineers enjoying this famous outing. Those with body-hugging suits and their super-lightweight gear. The old pensioners with their Silvretta 404 and enormous rucksacks who seem in no hurry whatsoever. Youngsters with snowshoes and snowboards strapped goodness knows how to their rucksacks, asking all those who overtake them “excuse me, is this the right way up?” Then there's the group with low-cut pants, fat skis, helmets and airbags. Once upon a time people contended for who could track the most curves. But times have changed because, with this equipment, those who now make the least curves win! In good conditions this itinerary can be done twice, even three times in a day!

Reach Paso del Tonale (1883m), leave the car in the car park at Telecabina Paradiso. Take the lift up and reach Passo Paradiso (2585m) in a mere 8 minutes, then take the chairlift Paradiso - Presena (2729m). After a good coffee at the Capanna hut, take the T-bar to the top of the Presena piste

From the top of the lift, cross the barrier which cordons off the piste and, with skis on your shoulders, ascend the 50m to reach Passo Presena. Enjoy the grandiose panorama onto the Vedrette della Lobbia and Mandrone. To the left you can make out the Crozzon di Folgarida chain, Crozzon di Lares, Corno di Cavento and Monte Carè Alto. In the center there are the three Lobbie, Cresta Croce, Dosson di Genova and Monte Fumo, while to the right lie Monte Mandrone and Corno Bianco. Descend diagonally right towards Lago Scuro. From here continue diagonally right or enjoy a second breakfast with a fantastic slice of cake made by Flavia at Rifugio Mandrone (2449m, mid-March beginning of May). Put the climbing skins on and ascend west to Passo Pisgana (2933m). From here, after the ritual photos and a sip of hot tea, a 1800m descent awaits! The first section leads to Vedretta del Pisganino and powder snow can be found even late in the season. The route then joins Pisgana and traverses a "ski cross" across fun and varied terrain. This leads to the "little road" (take care on the tight hairpin bends) leads to the Pegrà piste;  ski down this to reach the lift which leads to Corna d'Aola piste. Ski this, down the legendary black piste, to reach the start of the cable car Ponte di Legno – Tonale.

COMMENTS for the route "Pisganino"

No comments found for Pisganino