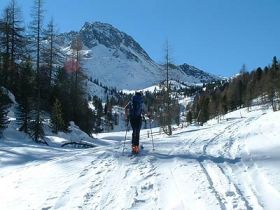 Extremely remote and interesting ski mountaineering itinerary, which requires a good level of fitness due to the significant height gain.

Val Senales can be reached easily from Bolzano by taking the SS38 westwards to Merano and then Naturno. After Naturno turn off right for Val Senales and reach Maso Corto at the valley head (Bolzano - Senales 60 km).

From the square in Certosa drive up the narrow road on the right to gain 150m in elevation. Park on the side of the road on steep fields above the village. From here ascend by crossing the forest road and following signs “Valle di Pinalto Malga di Pinalto”. Keep right along the forest road to reach the beautiful and recently restored Pinalto mountain hut. Ascend the slope above the hut in a long diagonal curve, this leads to the plateau beneath Monte Cavallo. Skin around this rightwards heading for the obvious col on the crest to the left of Cima Zerminig. In poor visibility orientation can prove extremely difficult. Once on the col at 3000m ascend behind this to another less obvious col on the same ridge. Take off your skis and reach the panoramic summit via an easy scramble up the rocky ridge.

COMMENTS for the route "Cima Zerminig"

No comments found for Cima Zerminig