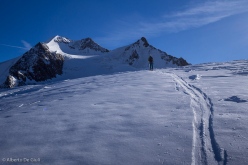 The climb up to Wildspitze, the highest mountain in Tyrol and the second highest in Austria, is a great choice at the start of winter when there’s little snow at lower altitudes.

Much of the ascent is done using the Pitztaler Gletscher lifts; skin up the last 700m from Mittelbergjoch, the obvious col close to the pistes that provides access to the Taschachferner glacier.

At the start of the season one usually has to descend via the ascent route, but in spring and with decent snow cover the descent down Taschachtal, 20km long and with a 2000m, is simply not to be missed.

From Innsbruck drive west towards Bregenz, leave the motorway at the Imst - Pitztal exit. Continue all the way up the valley to reach the Pitztaler Gletscher Bahn ski lift at Mittelberg 1736m.

From the valley station take the Pitztaler Express. At the top ski down the piste to reach the Mittelbergbahn cable car. Above this, at 3269m, descend the first 100m along the piste, then exit right and make the long traverse to Mittelbergjoch, the obvious col just a few meters from the piste.

From Mittelbergjoch ski down the steep slope for a few hundred meters on the opposite face to reach the bowl on the Taschachferner glacier. Put on climbing skins and ascend the glacier, passing below the seracs. Make a wide curve right and head to the col at Brochkogeljoch.

Reach the flattish section (crevasses) between Taschachwand and Brochkogel, then continue leftwards and head towards the obvious Wildspitze summit. Pass the long plateau and, after a steep section below the summit (crevasses), traverse rightwards to reach the base of the steep summit ridge. Stash skis and ascend the ridge to the summit (some exposed rocky sections below the summit cross; ascend with crampons). The view from the top is stunning, onto the surrounding peaks, the Dolomites and the mountains in nearby Val Senales.

Descend via the ascent route when conditions do not permit the descent into Taschachtal. In spring, reach the large bowl below Mittelbergjoch and continue down the Taschachferner glacier (watch out for crevasses). The last section that leads to the Mittelberg valley station lifts is flat and you need to push.

COMMENTS for the route "Wildspitze"

No comments found for Wildspitze 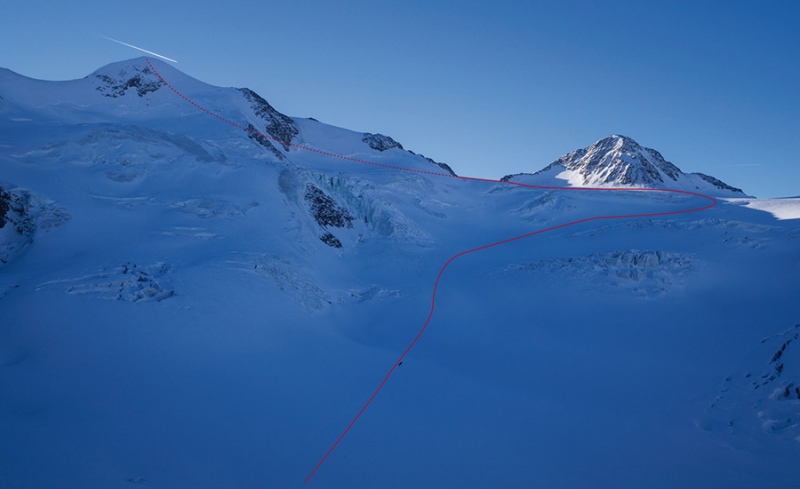 3 hours from the Mittelbergjoch col to the summit