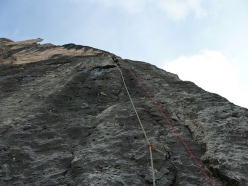 Lucertolaia on Lastoni di Formin in the Italian Dolomites is a route with a both traditional and modern feel to it, almost Californian with belays that are mainly bolted and the pitches that need protecting with trad gear as they breach black and grey dolomite limestone.
First ascended over various days on 2012 and 2013 with my brother Enrico and with the expert help of Dario Segato and Maurizio Fontana, Lucertolaia starts up the first pitch of Spiderman and then continues up the face in traditional style with safe bolt belays or enormous threads. The pitches on marble-like rock take good Friends for protection and offer some threads. Take care at the start of pitch 3 when reaching the first bolt; this is the first bolt shared by Spiderman.

Park the car a few hairpin bends below Passo Giau, towards Cortina, and take path #436 towards Forcella Giau. After the forest the path steepens; continue left along a trail past large boulders to the scree slopes that spill down from the Lastoni di Formin. Traverse high to reach the base of the wall. Allow about an hour for the walk-in.

Abseil down the route or descend down the East gully of Torrione Marcella.

Set of Friends to yellow BD, cordlets for threads, 10 quickdraws and 2 x 60m half ropes.

Lucertolaia should be repeated during dry summers as it climbs the black streak marks that seep after rain and remain wet long after the snows have melted.

COMMENTS for the route "Lucertolaia"

No comments found for Lucertolaia 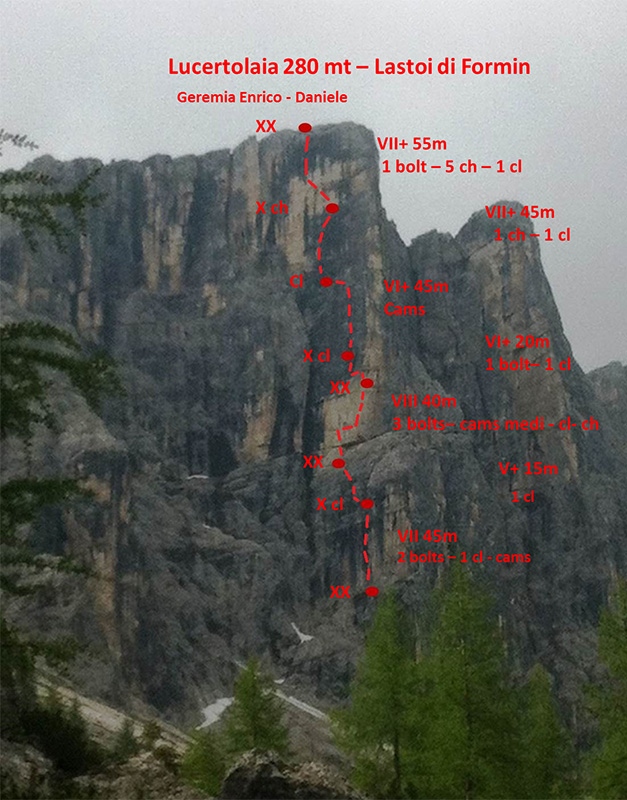