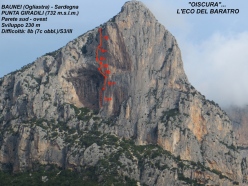 The new route Oiscura... L'eco del Baratro was first ascended ground-up using a drill and hook and without intermediate gear and it takes a line through the cave to the left of the beautiful Via Mediterraneo on Punta Giradili. Those who repeat the route in future will discover why we named the route the echo from the chasm.

The route is reached by the steep red roof which leads to the horrid overhang (this is what we always called it right from day 1). The two wildly overhanging pitches that breach the cave offer fabulous, pumpy stamina climbing up incredible tufas and crimps.

This continuity on pitches 3 and 4 stopped us from freeing the whole route, even though we did succeed in freeing all the moves and we reckon the overall grade may be 8b. Unfortunately Sardinia isn't that close for us to try the route over and over again!

The entire route is fairly run-out except the last bolt just before the belay on pitch 4, which was paced using A0 aid. Before making this decision we fought for two days, to no avail: we simply couldn't breach it and reluctantly used A0! The move was later tried and freed from above and this section in its own right could be somewhere in the region of 8a.

A leftwards traverse across the lip of the cave, "easy" but very exposed, leads to the last two fabulous pitches, a vertical slab of solid grey pockets which lead to the summit. The final pitch shares the last belay of Via Mediterraneo, the only point where the two routes cross, before finishing directly up the fall line!

Scramble easily up to the summit, follow the cairns along the ridge and reach the dirt track. 40 minutes. 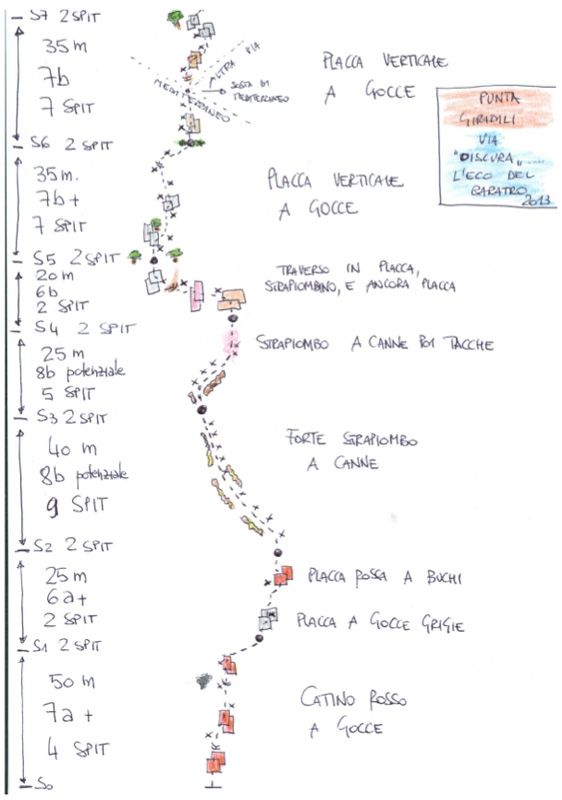 Canyoning descender for rope progression and emergency use....