Route established ground-up by Fabio Failla and Luigi Fiolcam on 02/06/2012. The climbing varies from cracks, corners, slabs and overhangs. The rock is particularly good quality apart from a few sections where it is still somewhat loose. The central section of the route is extremely exposed but offers plenty of good holds.

All the belays are equipped with bolts, as are the crux sections of the climb. The gear needs backing up with natural pro, nuts and camming devices.

The climb faces north and can therefore be climbed even in intense heat as it remains in the shade for most of the day.

Before reaching San Vito Lo Capo (Trapani) take the first road right and Pizzo Monaco begins to spring into view. Continue for circa 1.5km to reach the base of the north face. Drive along the gravel track on the right for 150m and park in the layby beneath the north face. Reach the start of the route in 5 minutes, located next to a small cave beneath the overhanging corner.

At the top traverse right along the small ledge for circa 7m, scramble down carefully to reach the final belay of "Parole al vento" and make three abseils: 1 x 60m, 1 x 30m, 1 x 60m. 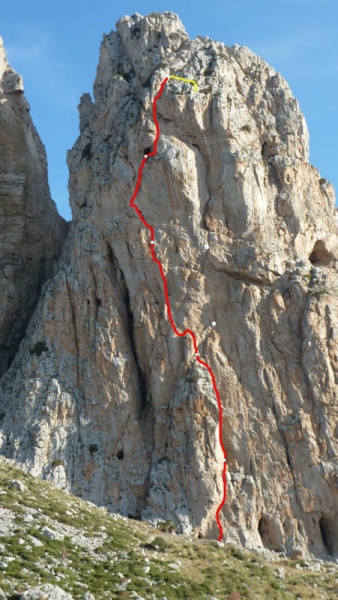