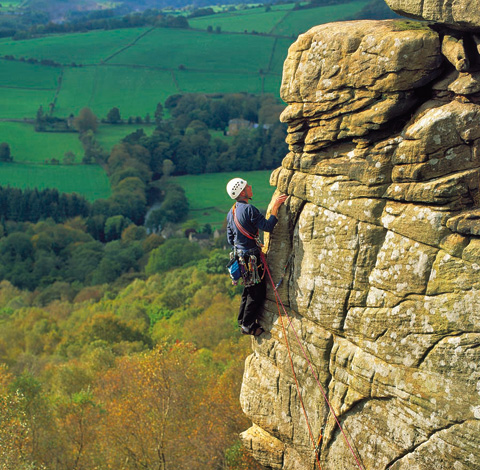 Overlooking the Derwent Valley, Froggatt Edge with its daring technical slabs and rounded buttresses is one of the favourite gritstone destinations in the entire Peak District. Much like at many of the other nearby outcrops, this crag was quarried throughout the 17th and 18th century resulting in plenty of well-protected crags and the steep technical faces which offer some of the finest slab outings in the country.

The classic Three Pebble Slab HVS 5a is a great introduction to this crag, while Joe Brown's somewhat stiffer The Great Slab E3 5b rates as one of the finest of its grade. Nearby Downhill Racer E4 6a is a different proposition altogether, and despite Jerry Moffat's feat of downclimbing it solo or Johnny Dawes' famous one handed solo ascent, the route remains a stern, serious lead.

Just round the corner stands one of the finest lines on grit: the blank arête of Beau Geste; first climbed in 1982 by Johnny Woodward using 3 ropes, this E7 6c has still seen only a handful of repeats. Sadly many climbers have used this route for toprope practice and the loss of some crucial pebbles was foreseeable. The route remains a formidable challenge though, as John Allen famously stated: "Beau Geste - it seemed to me that its ascent was a moment of inspiration fired by desire.... a classic natural sculpture and challenge.... made to be climbed, but only by the best."

From Sheffield there are two main approaches to Froggatt Edge, both from the A625 Fox House to Calver road. Each option takes approximately fifteen to twenty minutes to reach the main crag. The most popular approach is along the wide, flat path above the edge, which starts from the White Gate (O.S. ref. SK 254776) about 500m south of The Grouse Inn. Limited (thoughtful!) parking is possible alongside the road just north of the gate. Alternatively, a National Trust car park exists farther up the road towards the inn.

Gritstone climbing at its best: technical, balancy, powerful and pumpy all at the same time. The crag is suitable for families.

The Peak District
Squashed between the northern industrial cities Manchester and Sheffield, the Peak District has always been a haven of peace for those fleeing these massive industrial metropolis in search of solitude and untouched nature. Dotted within this rolling countryside are rugged gritstone outcrops, each unique, each with routes of almost all grades and danger levels. "God's own rock", as it is often described, can be so addictive that it is not uncommon to see climbers continuing even when it rains; saner wet weather alternatives include a visit to one of the numerous indoor climbing walls or an enormous mug of tea in a cafe. 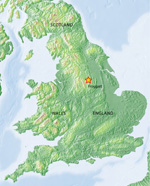 Spring and autumn. On clear winter days the friction is at its best, but beware of strong winds.