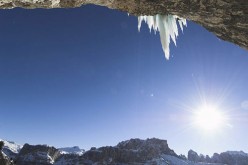 Leichtfried told us that Illuminati was "the route for which I had to put more effort in then for any other climb ever before. This mixture of hard mixed-climbing and serious ice-climbing is very demanding. Climbing over the curtain and the last ice pitch is dangerous and serious, the last pitch I don't ever want to climb again. I'm glad everything worked so perfectly."

As can be gathered easily, Illuminati is a severe and dangerous undertaking, to be climbed only when conditions are more than perfect. But let's hear how Albert prepared to seize his day.

From Selva in Val Gardena reach the Val Lunga.

On the left side of the valley, 10 minutes after parking the car - walk up the grassy hill to close to a rock cave . 1.5 hours

The route was climbed in "reloaded"- ie without spurs. Grading and a free ascent apply to this style only.

3x50m on the right side, lower part down a via ferrata

12 quickdraws, complete ice-rack. The route is partly equipped with bolts.

This route is a serious alpine undertaking, retreat is almost impossible. The upper ice section should be climbed only on cold days in the shade or on cloud-covered days. Whilst climbing the curtain make sure that your rope does not run below the curtain.

COMMENTS for the route "Illuminati"

No comments found for Illuminati 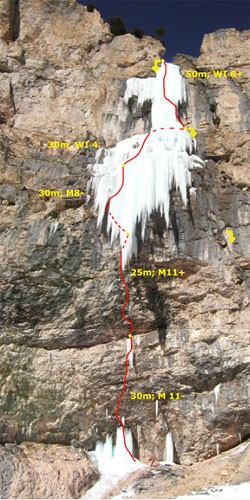