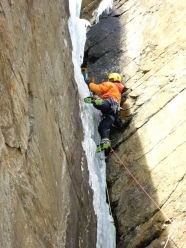 Despite its unattractive appearance from below, each pitch offers beautiful, logical, fund and demanding climbing. Don't underestimate the difficulties because of the bolts, the route demands great trad climbing skills. Established ground-up, the aim was to leave it as trad as possible yet at the same time avoid unnecessary risks, enabling others to  train for similar outings in the mountains. Apart from the belays, 3 bolts were placed therefore on otherwise unprotectable slabs or on sections where a fall would have resulted in falling onto a ledge. Furthermore, 2 pegs were left in-situ, one of which despite significantly reducing the demanding nature of pitch 3 is aimed at giving the route a demanding but "safe" nature.

Take the A5 motorway, exit at Aosta Ovest, continue to Val di Cogne and reach Cogne. At the fork bear right into Valnontey and park at the end of the road.

Trekking backpack Farpoint Trek 55 is the perfect rucksack for...