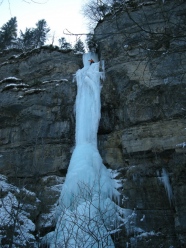 4 March 2010: “A new icefall has been discovered in the Vinadia canyon. It seems incredible that no one ever noticed such ice formations so close to home, or at least, that no ice climber ever took a closer look!” This is how Jasna and Federico invented this mini sector in 2010, right in front of their doorstep and in 2012, with the intense cold, the dance started all over again. An ephemeral dance, destined to stop as soon as the temperatures rise.

From Udine take the A23 motorway, exit at Carnia and continue towards Tolmezzo. From here take the SS52 towards Villa Santina and turn off right in this village for Lauco. Drive through Lauco to reach the hamlet Vinaio. At the start of this there is an ENEL electricity cabin on the right, with signpost for Forra, the canyon.

From the electricity cabin descend down the slope to reach the river, from here lose height again by entering the canyon for 15 minutes, following signs for forra. Walk past the icefall the enormous wedged block and Zia Mia apears on the right.

COMMENTS for the route "Zia Mia"

No comments found for Zia Mia