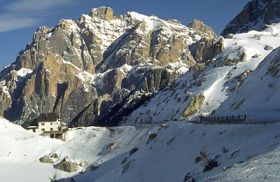 Sass de Stria (2477m), literally “bewitched rock”, was entirely tunnelled by the Austrian Army during the First World War, rendering it an important strategic stronghold, impenetrable for the Italian Alpini. The itinerary reaches the summit of the natural sentry post at Passo Falzarego and requires a certain level of fitness and familiarity with mountaineering techniques.

From Cortina take the SS 48 to Passo Falzarego and then continue on right down towards Valparola.

Park on the right close to the Austrian fort (2183m) at Sass de Stria.

Start by walking SE towards a large painted boulder. Follow the shoulder up and away from the valley that separates the Valparola road from Sass de Stria to reach the rocky crest without much difficulty. Continue on past a few rocky sections to the “crux”: a narrow chimney and an iron ladder. Take care as you climb up this as it is usually half-covered in snow. Next follow the crest, steering well clear of the cornices, to the summit cross at 2477m.

Return along the line of ascent.

Snowpack must be well bonded and stable. Watch out for cornices.