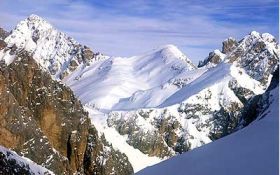 This is a great traverse above Passo San Pellegrino past three cols, across peaks that almost touch 3000m and down a splendid final descent. It is an unusual way of discovering the area, which remains largely untouched in winter.

Follow the road to Rifugio Fuciade (1892m) and from here continue to the Casoni di Valfredda (1908m) located immediately above. Continue up the valley to the left of River Zigole to then turn off left, when it gets somewhat steeper, to enter into the beautiful Val di Tasca (or 'Tas - Cia'). On the right a rocky outcrop bars the entrance to a gully. Ascend to the left of this outcrop and then climb up the gully to Passo delle Cirelle (2683m). At the col ski down the other side and after a few hundred meters traverse diagonally right so as not to lose height. Put the climbing skins on again to ascend the obvious slope up to Passo Ombrettola (2836m). From here climb up the wide slope to the right of the crest to reach the summit of Cima Ombrettola (2931m).

From the summit ski SE down the opposite face towards Sasso di Valfredda. A technical descent down this steep slope leads to Forcella del Bachet, and the descent from here is outstanding, in particular in spring snow conditions.
After the first descent keep right of the large gully to meet up with the line of ascent earlier in the day.

The traverse between Passo delle Cirelle and d'Ombrettola should only be carried out in good snow conditions. Do not be tempted to traverse high so as not to lose height.
The descent from Cima Ombrettola to Forcella del Bachet is the most demanding section on this itinerary and, should the snow be hard packed, consider descending on foot with crampons and then putting your skis back on at the col.


Note:
The snow quickly transforms on these south facing slopes and is ideal in spring.