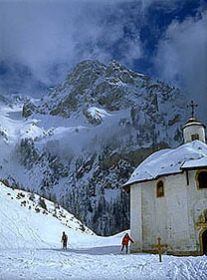 This is a great descent along the SW face of the Aiguille Grive. It is extremely varied since after the initial open slope a steep narrow gully is reached. Even though this is not an extreme descent, pay particular attention when starting from the summit and when entering the gully. The descent is sustained and requires settled snow.

Bourg Saint Maurice is the ideal village to be based in since the stations of Les Arcs 1600, 1800 and 2000 can be easily reached either by car or cable car. To get there from Italy, drive through the Mt. Blanc tunnel and follow the signs, via Megève, to Albertville.

Continue southwards to Moutier and then drive up the Isérè valley to Bourg St. Maurice.

From Les Arcs take the Pian Vert ski lift . Return to Les Arcs with the lifts.

From the top of the ski lift there are two possibilities.
1. walk up the NE crest of the Aig. Grive, skis strapped to the rucksack (30 mins). From the summit descend southwards and then arrive at a small Col by keeping to the right. Ski down the beautiful slope (roughly 200m) which terminates in a small valley. From here continue rightwards to reach the Col d'Entreporte.
2. do not ascend at all but instead traverse along the Aig. Grive until the south facing small valley is reached. Ski down this and then traverse to the Col d'Entreporte.

Enter the gully extremely carefully. The angle of the slope initially is not too steep, but this increases about half way down; continue until the gully becomes narrow again. Move rightwards at this point onto the open slope and traverse to reach first the forest and then the Chapelle des Vernettes (visible on the photo). From here traverse, pushing if necessary, to reach the Plan Peisey lifts again.

The slopes vary in angle between 30°-40° and is thus suitable only for good skiers - consider the type and amount of snow carefully. Either start from the summit of the Aig. Grive or, don't walk up to the top but traverse in from the east instead. This second option is less difficult than the first.

Descend roughly 1350m (1000m starting not from the summit but from the ski lift).

Super lightweight, durable and compressible hooded jacket; Ideal as a...