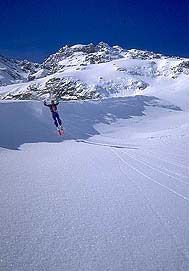 This is one of the most popular and spectacular itineraries, thanks to an easy ascent and breathtaking scenery. It crosses a large, isolated area and requires a substantial layer of snow.

Bourg Saint Maurice is the ideal village to be based in since the stations of Les Arcs 1600, 1800 and 2000 can be easily reached either by car or cable car. To get there from Italy, drive through the Mt. Blanc tunnel and follow the signs, via Megève, to Albertville.

Continue southwards to Moutier and then drive up the Isérè valley to Bourg St. Maurice

Take the lifts from Les Arcs 2000 to the Grand Col

From the top of the lifts continue upwards on foot for 15mins to the col. Descend from here for about 100m down a steep gully . Once the angle of the slope eases off you are faced with a choice.
Either
a) remain on the left-hand side of the valley underneath the Aig. Rouges and traverse high so as to avoid the band of rocks or
b) descend down the right-hand side of the valley towards Mt. Turia beneath the Grand Col glacier. Continue rightwards, circling the small rocky outcrop called Riondaz, and arrive, after a steep gully, on the Lavancher slopes.
Join up with the first variant (a) by traversing leftwards. From here continue traversing leftwards in a NNE direction to the woods near Le Crete. Pass underneath a cable and follow the summer path down some gullies and narrow sections to the houses of Planay. Le Pré can now be easily reached and its lifts take you back to Les Arcs.

The initial section is demanding, but after that the slopes are less steep. The route must be chosen carefully if no tracks can be followed. Experience is vital therefore.

Ascend a few meters only