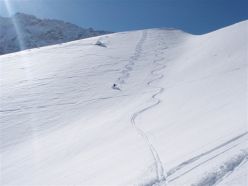 Perhaps the most famous off-piste route on the Tonale, Fuoripista Cantiere tackles the upper slopes of the beautiful Val Presena. Also known as Sgualdrino, this valley is a true paradise for off-piste skiing. In the 1970's the owners of the ski resort senses its potential and built a chairlift which from half-way down the itinerary transported skiers back up to Passo Paradiso. Unfortunately the chairlift has been closed for a number of years but hopefully a new lift will enable a new "freeride" area to be established just as in many other alpine ski resorts.

Car:
From Trento - motorway A22 (Brennero/Modena) north towards the Brennero, exit at S.Michele all'Adige; continue along the SS43 towards Passo Tonale to the bridge at Mostizzolo (4 km after Cles), then turn onto the SS42 and continue to Passo Tonale (motorway - Passo Tonale 90km).
From Milan - motorway A4 (Milano/Venezia) east towards Venezia, exit at Ospitaletto; continue along the SP19 towards Valle Camonica, at Rodengo Saiano take the SP510 and continue to Piancamuno. From here take the SS42 towards Passo Tonale (Milano - Pontedilegno 180km).
Train:
From Trento - take the train to Malè (Ferrovie Trento Malè), then continue by bus to Passo Tonale.
From Milano - take the train to Brescia (Ferrovie dello Stato), change here for Edolo (Ferrovie Nord di Milano). At Edolo continue by bus to Passo del Tonale.

At Paso del Tonale (1883m), park the car at Telecabina Paradiso. Take the fast lift which in a mere 8 minutes leads to Passo Paradiso 2585m. Access to the start of the itinerary depends on which itinerary you chose (see below).

This off-piste route can be accessed from three different points and it has two exits.
Cantiere: from the top of the Presena lift cross the barrier which marks the side of the piste and the start of the off-piste area and descend rightwards to enter the upper section of Val Presena. This section of the valley is wide open, offering therefore ample choice of where to ski. After a series of change in slope angles, some of which are quite steep and exciting, you reach the central section of the intinerary which is fairly flat: if you don't want to push too much, gather speed!. When you reach the start of the old ski-lift follow the old military road which leads gently (equivalent of a blue slope) to Tonale. Take care when reaching the tunnel circa half way down the road!

Sgualdrina: from Rifugio Presena ski behind the start of the ski lift and descend into the valley to the right of the lift (facing the mountain). The slope is wide and offers various descent opportunities. This itinerary  joins up with Cantiere just beofre the first flat section.

Monticello: from Passo Paradiso ski down the Paradiso piste for a few meters and then ascend the slope to the right. From here descend as best possible into the remote valley bowl located to the south of the Monticello crest. Join up with the other itineraries at the start of the military road.

Return: if you have two cars (or if someone comes to get you) then the best option is to leave a car at the start of the military road which leads to Val Presena. This starts on the right, circa 2 km after Passo del Tonale when heading towards Vermiglio. Park close to the water purification plant or just before a small bridge.
If you opt not to use the car then you have to use walk for 5/10 minutes. From the last hairpin bend on the military road head towards the big buildings at Tonale (often following other tracks). Reach the blue buildings, cross the main road and take the Tonale lifts (Alpe Alta chairlift).

COMMENTS for the route "Cantiere"