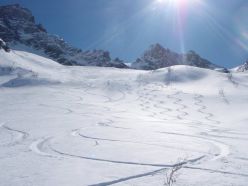 A great wide, north-facing slope with a series of different descents. The Paradiso is ideal terrain to learn off-piste skiing seeing that you can return to the groomed piste whenever you want. This itinerary is almost always in condition, even when there is little snow. Thanks to the new cable car which substituted the old one, you can ski down this route again and again without having to queue for ages.

Car
From Trento - motorway A22 (Brennero/Modena) north towards the Brennero, exit at S.Michele all'Adige; continue along the SS43 towards Passo Tonale to the bridge at Mostizzolo (4 km after Cles), then turn onto the SS42 and continue to Passo Tonale (motorway - Passo Tonale 90km).
From Milan - motorway A4 (Milano/Venezia) east towards Venezia, exit at Ospitaletto; continue along the SP19 towards Valle Camonica, at Rodengo Saiano take the SP510 and continue to Piancamuno. From here take the SS42 towards Passo Tonale (Milano - Pontedilegno 180km).
Train
From Trento - take the train to Malè (Ferrovie Trento Malè), then continue by bus to Passo Tonale.
From Milano - take the train to Brescia (Ferrovie dello Stato), change here for Edolo (Ferrovie Nord di Milano). At Edolo continue by bus to Passo del Tonale.

At Paso del Tonale (1883m), park the car at Telecabina Paradiso. Take the fast lift which in a mere 8 minutes leads to Passo Paradiso 2585m.

From Passo Paradiso, ski down the first part of the legendary black piste. After the second hair-pin bend, where the piste widens, break off left to reach a nice wide slope. This is split into four section, described from right to left (facing the valley):
Telecabina: ski off-piste close to the piste, beneath the Paradiso cable car. The terrain varies considerably with moguls and dips. Return to the piste at the end of its long straight section.

Canyon sector: descend directly towards the cable car valley station to reach a fun and spectacular canyon. At the end of this natural  “half-pipe” join up with the final part of the next itinerary, to then return to the groomed piste.

Tonale sector: cut across the slope leftwards to reach the wide slope to the left of the canyon. Return to the piste as for Canyon.

Alaska sector: after the first part fo the previous itinerary, continue leftwards to reach a wide gully (the first section is fairly steep), towards  Sledog. Ski down this to reach a wide open area where in good snow conditions the slope resembles a fun Super G slope, with alder trees sprouting out from the snow like gates. Cross the river  Ogliolo and pass above (recommended for snowboarders) or below the sledgedog kennels to reach the Pegrà piste. Return to Tonal using the lift at Colonia Vigili (1634m).

COMMENTS for the route "Paradiso"

No comments found for Paradiso