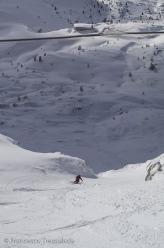 A beautiful, steep and demanding gully which is surprisingly skiable and cuts down the West Face of Piccolo Lagazuoi, to the left of the Trapezio and directly down to Forte Tre Sassi. By descending behind the fort and crossing the  Passo Valparola main road you can join up with the final section o the ascent for Prati di Camera.

From the top of the cable car descend down the piste which leads to Armentarola; after a long flattish section reach the height of the col (marked 2536m on the map) which breaks crest of Piccolo Lagazuoi (2778m). Put climbing skins on and ascend diagonally to reach the col and look down onto a large suspended ledge. Ascend this leftwards, behind a large tower (which blocks the view from the road) to reach the last col which leads to the descent gully.

Descend rightwards into the gully and ski down taking great care, above all if the snow pack is hard. A variation to the left can be chosen at this point. After reaching the easier slopes at the base of the face continue down directly to Forte Tre Sassi. If you haven't parked a second car here for the return, continue to the Armentarola piste by following the Prati di Camera route which is reached by descending the slopes behind the fort.

Before carrying out the descent it is fundamental that you carefully check the conditions of the face from the passo Valparola road. 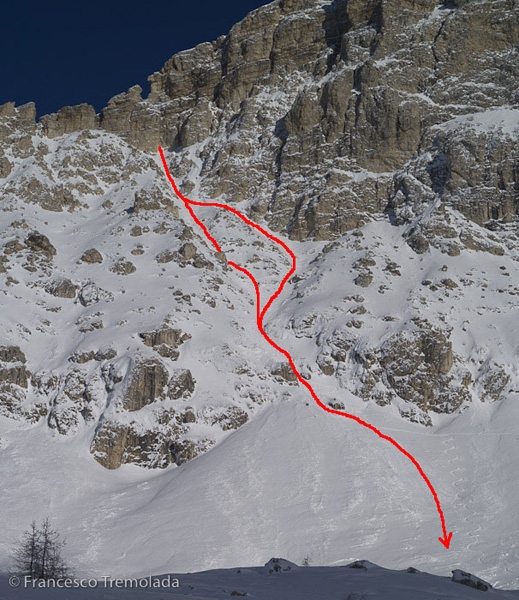