An interesting descent down the gully and slope clearly visible to the right of the West Face of Sass d’lacia. The descent is reached via the Lagazuoi piste and a short ascent close to the ridge between the Salares col and Sass d’lacia.

From the top of the cable car descend down the piste which leads to Armentarola; after a long flattish section the piste narrows and curves sharply right to reach a less steep, open section with view onto the first trees. Leave the piste at this point leftwards and ascend past the rocky elevation to the right to reach the descent slope. A steep section leads down into the valley below, now keep high to the left and traverse upwards towards Sass d'lacia. Quickly reach the col which dominates the descent slope.

Take care while descending the first meters down the gully which leads to the wide slopes below. Search for the best snow past the open patches and pine trees and the forest on the right. Towards the end of the descent head right, above the main road, and continue through the forest to reach the cross country piste and the cross country hut. 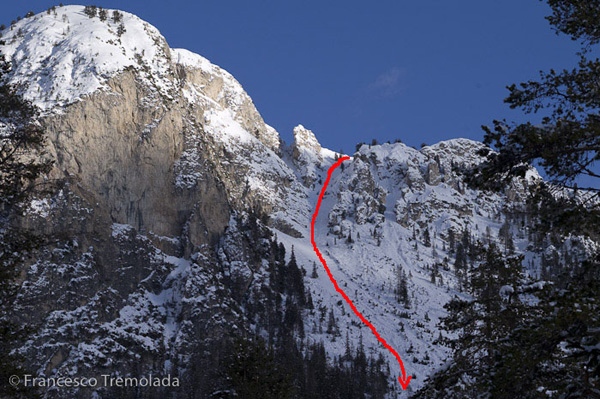