As you descend down into Val Badia along the Passo Valparola road you cannot but notice the beautiful line of forcella Salare’s southern couloir (otherwise known as forcella Stores). A great alternative to the more repeated Col dei Bos couloirs, even if returning is not as easy without a second car.

From the top of the cable car station ski down the slope which leads to Armentarola following the long and slightly uphill section which then narrows down and makes a sharp turn to the right reaching a wide area which is less steep and within sight of the first trees. Exit to the left traversing up high on the north face of a small rocky rise in the ground (side stepping for a few metres) till you see forcella Salares (summer path signposts) which you reach going downhill.

Enter from the right to the left along the steep and narrow couloir, which you descend with controlled turns, especially if the snow is hard. At the base turn right and lower yourself down till you reach a short steep section covered in thick dwarf pines; once you have overcome this at its best point you will reach the easier final slopes. From here proceed towards a forestry house and to the left of it follow the tracks of the old road which leads you to the state road (roughly 2000m of altitude). If you have not organized a second vehicle to return, follow the road downhill for roughly 500m and take the forestry road to the left which joins up with itinerary n.66 at the same height as the hayloft. Go along the road tracked by motor sledges and along the last flat section near the cross country piste you will reach the Armentarola hotel (skibus for passo Falzarego).

Wait for the sun to soften up the snow for a great ski down.

COMMENTS for the route "Forcella Salares"

No comments found for Forcella Salares 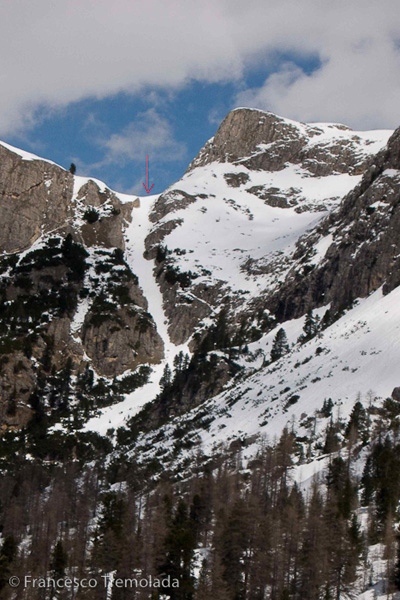