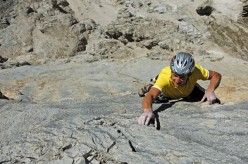 In summer 2006 Massimo Da Pozzo, Tiziano Cipriani and Nadia Dimai established a demanding new route up the Torre Dusso (2618 m). This peak is part of the mountain called Costa del Role, which culminates with two peaks (Torre Dusso and Torre Piazzesi, dedicated to two Venetian mountaineers who died on the summit in 1948). These peaks rise steeply to the east of Forcella Loschiesuoi and continue SE along the rocky crest  (dubbed "Mèscole") opposite the Corvo Alto.
The route climbs soldi rock and is equipped with bolts and is highly recommended, though the high obligatory grade requires excellent climbing skills.

From Passo Giau (2233m) follow path No. 436. Reach Forcella Zonia and continue on to Forcella Col Piombin and into Val Cernera. Leave the main path and ascend the scree slope up the gully which leads to Forcella Loschiesuoi (2470m - 1 1/4 hours).
From the col descend south down the opposite face, down the gully on the right for circa 100m until you can cross this more easily. Scramble towards the south face of Torre Dusso. A bolt marks the start of the route (15 minutes circa from Forcella Loschiesuoi).

COMMENTS for the route "Via Calispera"

13-07-2012, Aristomenis Thanopoulos
I wonder why Massimo (I'm a big fan of his (routes), btw) named that one using Greek, but I saw it as a good sign. Indeed I managed to OS all the pitches on 13/8/2011. Difficulty increases pitch by pitch, so you can try the crux one perfectly warmed-up. It took me 1:20'! No chalked holds at all, and a lot of technical sequences, but there are some good rests in between. Conditions were perfect, i.e. atmospherically foggy instead of sweaty sunny. Part A of the approach (up to the forcella) was probably shorter than 1 hour , but part B was a little bit dangerous and took us at least half an hour and a short belaying. Perhaps we missed the correct passage. Descent is steep & can be dangerous, i.e. slippery when (grass is) wet. Rock and route position are perfect and the route is excellent 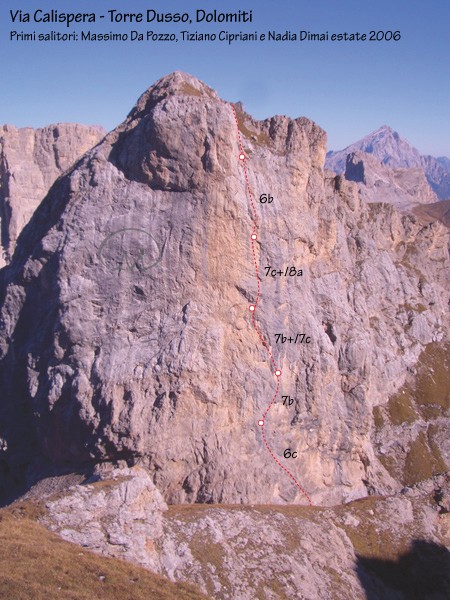