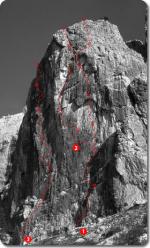 This is a nice route, somewhat harder and less repeated than Geo and Brunsin. Two bolts protect the cruxes, but the fifth pitch, which takes natural pro, is not to be underestimated.

The Sella group is surrounded by four passes: Pordoi, Campolongo, Gardena and Sella. Torre delle Meisules Est lies in the north between the Sella and Gardena mountain passes. Park the car on the long straight section beneath the Torre (clearly visible from the road).

Approach the tower by following a trail for 20 minutes to its base and the wedged block in the gully from where the route starts. After the first shared belay with Geo move left away from Geo’s roof up the black slabs.

From the summit walk leftwards (east) towards the Murfried towers and then follow a broken path down to the base.

A set of wires, friends and plenty of kevlar threads.

COMMENTS for the route "Plitschka"