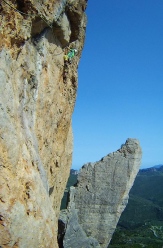 From Ulassai to take the road towards Santa Barbara. Drive past a first lane, then a second lane with a gate. Park the car in the layby on the left, at a third lane. Follow this on foot and after 5 minutes discreetly walk through private property. At the end of the road climb over a fence and follow the path diagonally upwards towards the tower. Reach an old track. Follow this leftwards for 5 minutes to reach a giant cube of rock on the left. From here scramble upwards past cairn markers to the base of the cliff (25 minutes).

Abseil descent, the second being 60m into the void

COMMENTS for the route "Incantos"

No comments found for Incantos

The wall faces south and is located at 900m. While it is ideal in spring and autumn,climbing is also possible on sunny winter days. In summer the face receives the shade early in the morning or late in the afternoon.