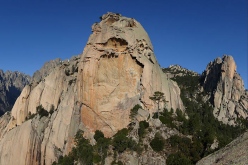 Established in 1992 by the Frenchmen Arnaud Petit and Stéphane Husson, as the name suggests Delicatessen is a strong contender for one of the most beautiful difficult multi-pitches in the world.

Petit and Husson forged the line ground-up with the use of aid and Petit explains: "In 1992 we had little experience at establishing new routes and we couldn't on-sight harder that 7c+, which generally meant that we couldn't equip a pitch adequately if it was harder that 7b+, but nevertheless we attempted the route ground-up. We needed numerous days to climb six short pitches and, apart from some sections on pitch 3, the route was estabilished using aid, climbing from one bolt to the next. The difficulties were such that we simpy couldn't do anything else."

The route was repeated for the first time in spring 2011 by the Swiss climbers Cedric Lacat and Nina Caprez.

From Solenzara take the road towards Col di Bavella. After Bocca di Larone (608 m), the view opens onto the beautiful granite towers. Continue to the bridge at Polischellu and park the car circa 300m further in a layby on the left.

Opposite the layby there is a recently tracked path. Follow this for 20 minutes until his descends to the river, after having past a narrow ledge. Wade through the river and ascend the opposite slabs (Grade II, slippery when wet). From here follow the cairs to beneath the route Jeef, then continue as best possible up the gully to reach the base of the wall, circa 50m beneath Delicatessen (1.15 hours from the car).

Airy abseil down the route.

More details about this route can be found in the book "Parois de Légende" written by Stéphanie Bodet and Arnaud Petit, Glénat Presse.

COMMENTS for the route "Delicatessen"

No comments found for Delicatessen 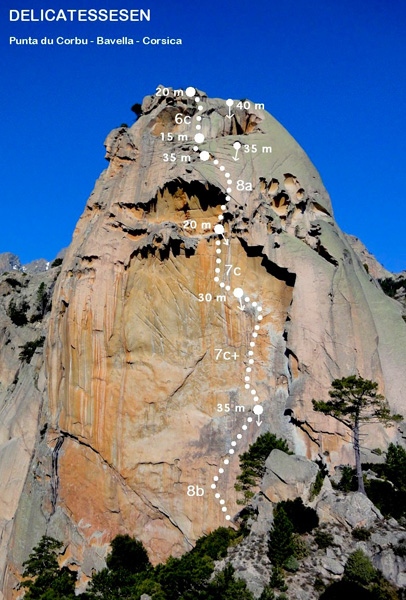