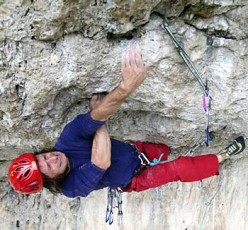 In July 2004 Mauro Bubu Bole frees one of the most eyed-up overhangs in the Dolomites, the mythical Italia ’61. The route was first climbed over 40 years ago by Bepi De Francesch, Quinto Romanin, Emiliano Vuerich and Cesare Franceschetti, on the highly popular south face of the Piz Ciavazes, Sella.

Bubu Bole climbed the route up to mid-height ledge, the Cengia dei Camosci, where almost all climbers then return to the valley floor. The crux of the route is comprised of two pitches that weave through the stepped 4m roofs, and now go free at 7c+ and 8a.

From the car park follow a small path up to the wall.

From the ledge at mid height traverse right and scramble back down to the pass.

COMMENTS for the route "Italia '61"

No comments found for Italia '61