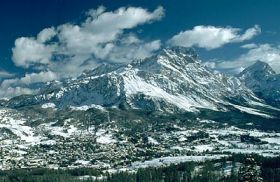 This is an easy itinerary at the foot of Monte Faloria, close to Cortina. It leads almost level through larch forests and past rocky outcrops that still nowadays echo the legends and history of the first inhabitants of the Dolomites.

Take the Faloria cable car (located next to the bus station in Cortina) to the middle station at Mandres 1480m.

From the middle station at Mandres take the obvious path which, after an initial flat section, then descends for a few hundred meters. Follow signs for path no. 220 and Fraina, walking through a beautiful and sparse forest of larch trees which, like all conifers, prefer direct sun light and terrain subject to landslides such as the one encountered on this itinerary. It’s highly likely that you’ll encounter squirrels along the way – they build their dreys high up to escape the marmots and birds of prey, and their diet consists mainly of seeds from conifers and broad-leaves, fruit, bark, eggs and small insects. The path leads easily uphill to the rocks called "Ra Crepedeles" (little crags) with the "Porta del Dio Silvano”, loosely translated as the “Door of God Silvano”. This is an immense rectangular niche located at the base of the wall and scene of many a legend and fable. From here a steep descent then leads to a wide opening above the Meneguto farm, where the itinerary finishes.

Return by taxi or walk down to the main road and take a bus back to Cortina.

No obvious danger. The itinerary can also be carried out during snowfalls.

COMMENTS for the route "Mandres - Fraina"

No comments found for Mandres - Fraina