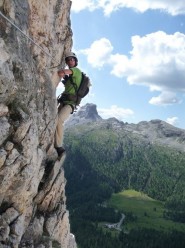 In November 2007 the Italian military, based in Bolzano, established a via ferrata on Col dei Bos. This "Via ferrata degli Alpini" follows the line of an existing route and works were completed in November 2008.

From Cortina d’Ampezzo drive towards Passo Falzarego via the SS48. Park the car circa 1.5km before the pass, at km 107.3 at the restaurant "Da Strobel" opposite the pistes close to Rifugio Col Gallin (2050m).

From "Da Strobel" take the obvious path from the NE edge of the car park, following signs for Col dei Bos, to reach the military road which soon leads to remnants of the Italian First World War hospital located beneath the Torri di Falzarego. A dry-stone wall marks the landing spot for helicopters, while to the north one can make out the descent path which zig-zags steeply down the gully. Continue east past the ruins and across the meadows towards the Col dei Bos pyramid. A path leads off from here, initially traversing at altitude, before gaining height rapidly to reach the start of the via ferrata. The steel cables can be made out from below.

The itinerary follows a logical line up the face and the first section, which acts as a "filter", is certainly the hardest. The cable tension and anti-fall cones can be appreciated right from the outset on these vertical sections. After circa 80m the ferrata leads to a wide and easy chossy ledge and then a ramp which, in turn, leads to a short wall which is exited via exposed moves on easy rocky slopes. From here the ferrata continues easily and the cables substantially acts as a handrail until the ferrata reaches another vertical, demanding wall. At the top of this an exposed traverse right leads to a corner and then a grassy section.

Cross the 20m grassy slope to reach the second half of the via ferrata, which is characterised by somewhat easier terrain and the occasional technical section. The second traverse is particularly panoramic and offers splendid views onto the entire Cortina basin. This is certainly the easiest part of the entire route and it terminates by descending a short ridge after having reached the summit of the Col dei Bos pyramid  at 2400m.

The ferrata now finishes on a small col. On the left (NW) these is an escape route (WARNING: for experts only) which is also the descent route for climbers who reach the summit of the Pyramid. This short cut leads to the grassy slopes and joins the path which descends between Col dei Bois and the Torri di Falzarego.

Af the end of the ferrata follow the route along the col and after an easy ascent marked by cairns reach final ferrata section, 100m long and at times exposed and vertical, but always with plenty of holds which ensure fun and easy climbing. On this final section note the different anchor systems which form part of the "ferrata safety" project.

Reach the summit meadows, close to the splendid Col dei Bos rock faces. From this stupendous natural balcony enjoy the fascinating view onto the summits in the Ampezzo basin.

Note: The Col dei Bos summit and cross (2559m) can be reached via a short walk by following the numerous tracks upwards or by walking east beneath the rock face past the numerous remains of the First World War and ascending to the summit up the grass gully a few hundred meters to the east.

Three possibilities
1. At the end of the ferrata follow the obvious tracks which lead leftwards (west), first past meadows, then along scree with one delicate section to the nameless col. Along this route observe the surprising red Raibl which formed more than 220 million years ago and the wooden remains and barbed wire which reinforced the First World War front in an  attempt to protect the col. From here the path descends into the valley between Col dei Bos and Torri del Falzarego and, at times along unkempt sections, leads quickly down the remains of the military hospital close to the start of the ferrata. From here return along the ascent path the car park at Bar da Strobel. (1 hour)
2. A less steep alternative can be taken by continuing to the west of the nameless col to reach, via massive Dolomite gradients and the gently-angled meadows the Forcella Travenanzes. Follow path No. 402 down the Lagazuoi ski piste and then continue bear left (East) along path No. 423 just before reaching Passo Falzarego. This leads along the military road to the car park at Bar Strobel. (2 hours).
3. An alternative descent, especially at the start of the season when there is still plenty of snow around, is to walk east around Col dei Bos via the numerous tracks and easy meadows towards Col dei Bos, close to Castelletto di Tofana. Take path No. 402 which then transforms into a military road. After the tunnel continue for circa 300m then bear right (west) at the fork which leads to the remains of the military hospital after a brief 150m ascent. (1.5 hours).

This ferrata can be linked to the nearby tunnels on Lagazuoi or Castelletto di Tofana:
Gallerie del Lagazuoi: from the col with no name continue to Forcella Travenanzes and along path No. 401 to reach Rifugio Lagazuoi; the tunnel entrance is located prior to the refuge, directly below the cable car. At the end of the tunnel follow the instructions in descent No 2. (WARNING: apart from the via ferrata kit, headlamps are indispensable.)

Gallerie del Castelletto: from the summit of Col dei Bos descend east towards Forcella Col dei Bos from where path No. 404 leads to the start of the Castelletto tunnel. This leads back to Forcella del Col dei Bos. To return to the carpark the instructions in descent No 3. (WARNING: apart from the via ferrata kit, headlamps are indispensable.)

COMMENTS for the route "Via ferrata degli Alpini" 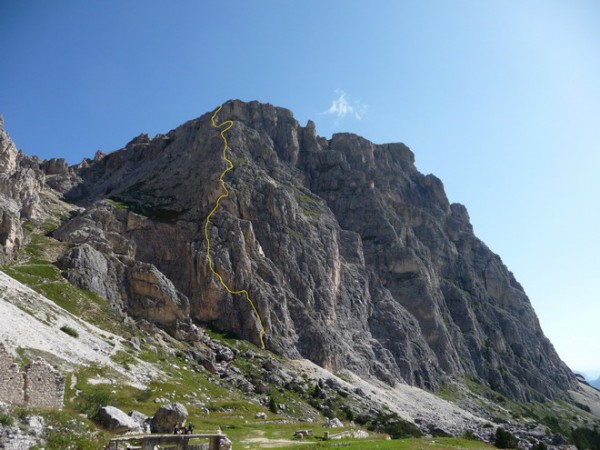