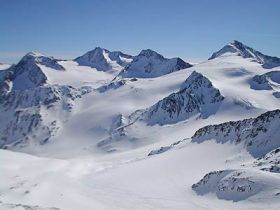 Stupendous itinerary; if combined with a descent into Val di Fosse it becomes one of the best traverses in the Alps...

Val Senales can be easily reached from Bolzano by taking the SS38 west to Merano and continue for Naturno. Immediately after Naturno turn off right for Val Senales and, at the end of the valley, Maso Corto (Bolzano - Senales 60 km).

From Maso Corto take the cable car to the summit of Cornacchie, ski down the piste to the the skilift and then descend for a further 50m. Put on the climbing skins and then ascend diagonally towards the Saykogel summit. At circa 3000m change direction and ascend the slope heading towards the wide open valley (3280m) located between Punta Finale and Hauslabkogl. The surrounding peaks seem imposing from here: Similaun to the right, Cime Nere in the center with their impressive north faces, and Marzell Spitze on the left.

Now descend diagonally right towards the obelisk, which marks the spot where the ötzi was found. Continue descending across the slopes beneath Giogo di Tisa and then put the climbing skins on once more to reach Rifugio Similaun. The itinerary is relatively straightforward from here: climb up diagonally beneath Giogo Basso towards the shoulder at 3243m, then head towards Piccolo Similaun. Depending on snow conditions complete the final 100-150m on foot. The summit view is breathtaking.

As for the ascent.
Alternatively, opt for the highly satisfying traverse down into Val di Fosse to Fuori. From the summit descend down the crest for a few meters before descending the face on the left, either on foot or, snow conditions permitting, skiing.

reach the glacial basin below and continue right past Similaun and descend towards Val della Grava. Keep on the righ thand side of the valley where this narrows. When the descent is in good condition it is possible to ski to within 30 mins of the car park, before continuing on foot.

Should conditions worsen or to avoid putting the climbing skins on once more descend from Rifugio Similain to Vernago down Val di Tisa (OSA). Check snow conditions beforehand, as this entire descend faces south.

COMMENTS for the route "Similaun"

No comments found for Similaun