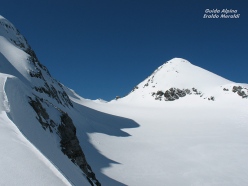 Cima Tuckett, also referred to as Tuckett Spitze in German, is located in the Trafoi-Thurwieser subgroup of the Ortles - Cevedale massif. It rises between Passi di Campo and Passo di Tuckett on the southeastern section of the Madaccio glacier. Its beautiful, pyramid-shaped SE Face looks out onto the Campo glacier and is comprised of extremely friable rock, whereas the northern slope is covered in ice and, when covered with snow, elegant.
The mountain is named after English alpinist Francis Fox Tuckett, one of the first to explorer these mountains. The name was given by the famous mountaineer cartographer Julius Payer who on 12 September 1866 made the first ascent of the peak via the North Ridge together with mountain guide Johann Pinggera. The 1931 IGM map calls this summit Punta delle Baite.
The interesting and steep NW Face was first climbed on 14 August 1931 by the mountain guide from Bormio Celeste Sertorelli and the great ice climber Giuseppe Pirovano. The first ski descent was carried out on July 7, 1971 by Heini Holzer, the famous chimney sweep and mountain guide from Tubre in Val Venosta.
During the First World War (1915-1918) the 1st Austrian front was located here and in summer you can still see what remains of the numerous barracks, while at Passo di Tuckett it’s interesting to note the remains of the former Rifugio Locatelli, built by CAI of Bergamo in 1937; this served as a base for the beautiful and challenging ascents in the Trafoi - Thurwieser area and also for the once popular traverse from the Stelvio Pass to Rifugio V Alpini in Val Zebru. The Ninotta bivouac (3380m) is located slightly above and to the east of the pass, on the ridge that leads to the southern pre-summit of Madaccio di Dentro. Built on the base a military barrack, this bivy is still in good condition and sleeps up to nine.
Modern alpinism and ski mountaineering take little account of these bivies located in areas that have now become more accessible; it could be very interesting to spend a night in a lonely place, enjoying the silence and maybe a magical sunset enjoying the beautiful mountains and savoring the slow pace of the evening, a prelude to a starry night that always fuels new dreams and brings tranquility to everyone’s hearts.

Stelvio Pass: from Bormio take the SS38 (21km) to reach the Pass.
Franzenshöhe: from the Stelvio pass, descend towards Val Venosta down the winding road (22 hairpin bens) that leads to Trafoi and the village Franzenshöhe (2189m) and the hotel. From Meran drive up the Vinschgau valley to reach Prato Stelvio, continue on to Franzenshöhe or the Stelvio Pass.

Descend via the ascent routes. From Punta degli Spiriti you can descend down the West Face (normal ascent route) that leads into the upper basin of Vedretta dei Vitelli and then joins, trending rightwards, the ascent area.

COMMENTS for the route "Cima Tuckett"

No comments found for Cima Tuckett 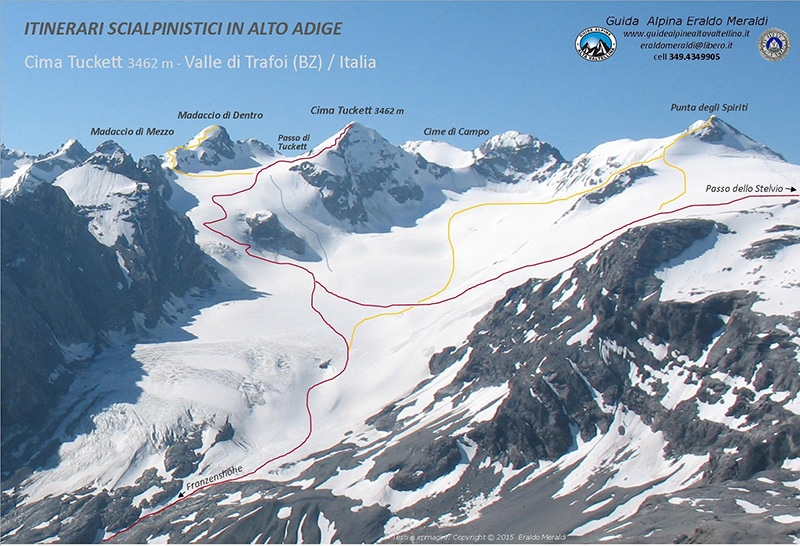 From the end of May (the Stelvio pass opens) to June. In autumn, snow conditions permitting.