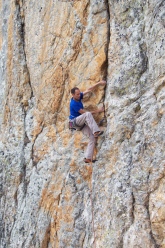 Beautiful traditional route, athletic and sustained despite its short length. It was established by Giovannino Massari and Andrea Parodi in July 1982, in two attempts, using
almost exclusively nuts (including the belays) except for 3 pegs on Pitch 1 and 1 on Pitch 2. The first ascent was made ground-up and free, except for the small roof on pitch 1 which Massari freed during a later repeat.
In August 2012 the route was restyled by Giovannino Massari and Paolo Seimandi; the belays we're equipped with bolts (Kinobi hangers and Raumer abseil rings), while pegs and old, unsafe in-situ gear were removed. The demanding nature of the original climb has almost  entirely been preserved. The grades have been updated.

Follow Valle Maira to Chiappera (Acceglio). Then continue via the tarmacked road which then becomes a gravel track heading towards Grange Collet. Park in the layby close to the path which leads to Colle del Greguri.

The route starts circa 15m to the right of the classic Superfigari, close to a white wall beneath a yellowish flake (clearly visible an old peg and maillon rapide).

P1: Climb the featured crack until this finishes at the slab; traverse left towards the arched corner and follow this to the roof. Breach this by jamming the small crack and reach the small ledge (35 m. 6b+)
P2: Climb directly up for a dozen or so meters, past a section which is shared with Superfigari, and where this traverses left continue right following the small corner which leads to a grassy ledge (this section is hard to protect). (35 m. 6a)
P3: Climb the yellowish corner, athletic and overhanging, to reach a comfortable ledge. (30 m. 6a+)
P4: Climb left, avoid the loose blocks (ignore the peg higher up to the right), climb around the arête and continue straight up via small corners (pegs) to belay in the yellow niche. (30 m. 6a)
P5: Continue up the corner for a few meters to where it is possible to breach out left and continue diagonally left up featured rock to the large gendarme on the ridge. (35 m. 5c)

Abseil down the route with a 70m single rope, or abseil down the west face from the belay and cairn. Then traverse easily to the col Forcella Provenzale and the Camino Est abseils.