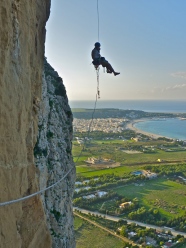 Established ground-up in November 2011 by the Americans Chris Kalous and Jonathan Thesenga except for the crux pitch, Blow it up on the internet offers "near-perfect brown and orange rock with sculpted jugs, tufas and thin cracks, overhanging the entire way." The route climbs to the right of La Lingua Pura of which it shares the first two, and final pitch and "The two roofs were both heavily featured with tufas, allowing us relatively easy (7a-7a+) passage for such horizontal terrain. The penultimate pitch proved to be the crux, demanding technical sequences and long pulls between holds on wild, overhanging climbing. Fortunately a hole at mid pitch provides a respite from the difficulties and chance to de-pump before the final boulder problem."

From San Vito Lo Capo drive to the obvious Monte Monaco. Park the car below the north face.

Walk to the north face and the base of the route in just 15 minutes. The route starts left of an obvious grey pillar, sharing the same first two pitches with La Lingua Pura (that name is written at the start).

Walk down the south face in 30 minutes, following ledges and goat trails.

The route is a mix of bolts and traditional protection, and all anchors are bolted. The second pitch of La Lingua Pura (which our route shares) is chossy, but is definitely not indicative of the quality of rock that lies ahead. On the crux pitch, the bolt out right of the hole is the way to go—the bolt out left was an error and we never had the chance to remove it.

COMMENTS for the route "Blow it up on the internet"

No comments found for Blow it up on the internet 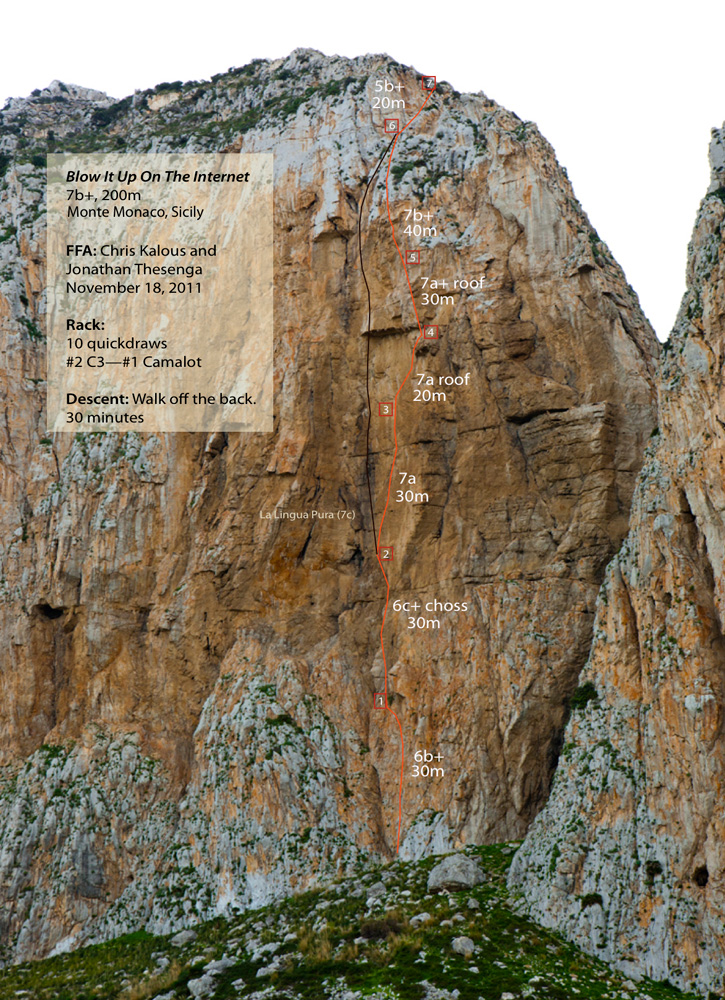