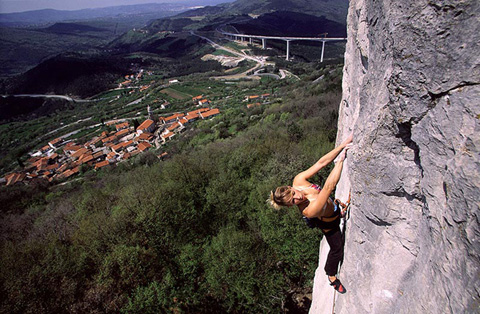 Despite its size and beauty, Crni Kal has always lived in the shadow of nearby Ospo and Misja Pec. Yet the shady forest, numerous routes of all difficulties and splendid view onto the Gulf of Trieste render this Slovenian crag well worth a visit.

The rock is part of a long limestone band which extends almost 150 km from Duino in Italy and continues via the Carso and Val Rosandra to enter Slovenia and finish at Rijeka in Croatia, forming an immense Karst plain.

Ruins of a medieval defence tower testament the importance of this natural border between these lands and the Balkans. The few lines of comunication passed this point and all traffic was controlled from here.

Crni Kal is located across from the border from Italy's Trieste and just off the new A1 motorway which connects Llubljana with Koper. From the A1 exit onto the 409 following signs for Crni Kal.

The climbing varies considerably from short slabs to steep overhangs. Holds tend to be small and polished. Good technique and strong fingers are the key to success...

The camping ground at nearby Ospo is open all year round.

Crni Kal is extremely popular with climbers from Slovenia and its neighbouring countries. If at all possible avoid Easter and All Saints.Other crags in the vicinity include Misja Pec, Ospo, Napoleonica and Val Rosandra.Should it rain visit the Grotta Gigante (the largest cave in Europe).

No comments for Crni Kal

The crag faces south and is ideal therefore in winter, spring and autumn. It dries quickly after rain and is sheltered from the gusty bora wind.