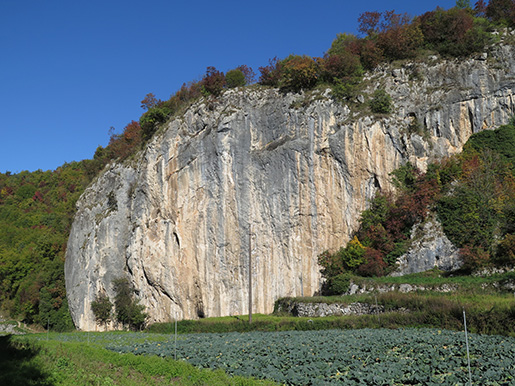 One of the undisputed jewels in Arco’s crown, the small crag Nomesino is actually located in Val di Gresta, above the main road that leads from Rovereto towards Lake Garda and Arco. The first climbs on this splendid sheet of overhanging yellow and grey limestone were bolted in 1987 by Ermanno Dossi and Giuliano Dorigatti, and then crag was later developed by the likes of Stefan Fuchs, Diego Mabboni, Giorgio Manica, Loris Manzana and, above all, Rolando Larcher.

Ex Express quickly became a reference 8a for its beauty, while in 1988 Larcher climbed his first 8b with Energia = Mc2. The crag hosts 32 routes and is not particularly suited for beginners, as the majority of climbs are harder than 7a. Talking of which, even today Bucomagia is recognised as one of the most beautiful pitches of this grade in the entire Arco climbing area!

Take the SS240 that leads from Rovereto to Nago / Torbole. Turn off at the roundabout at Loppio and head up towards Ronzo Chienis along the SP88 to reach the town Valle San Felice. Immediately after the church turn off right, following signs for Manzano - Nomesino. After the small tunnel, drive through the hamlet Manzano and turn off sharply left at the bus stop, up the narrow road all the way to the crag. Park with care and attention, the crag is located on private property.

No comments for Arco - Nomesino