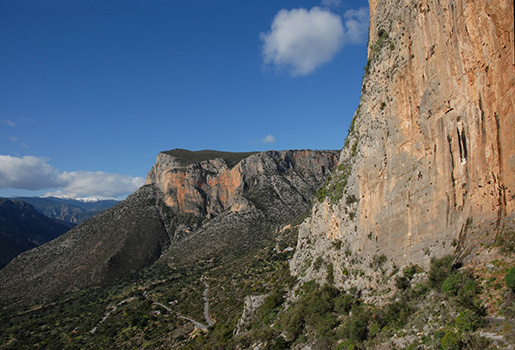 A town with approximately 6000 residents, Leonidio is built in a valley at the foot of Mount Parnon, on the east coast of Peloponnese. Towering above the homes like a giant fiery waterfall is a jaw-dropping, 250-meter, red limestone cliff. The entire area around Leonidio is well on its way to becoming an enormous climbing park. At the time of writing there are about 300 routes and counting. The vast potential is obvious: Leonidio has morphed into a climbing ‘worksite’, with new crags and routes going up feverishly.

Climbing in Leonidio started in 1987 with the opening of the legendary multi-pitch ‘Pillar of Fire’. A few more trad lines followed, but then for several years climbing went into hibernation. However, the opening of a new crag called Elona in 2008 reawakened climbers’ interest in the area. By this time, the success story of Kalymnos had also spread far and wide, so a regional development office was able to obtain EU funding for the equipping of 100 new sport routes in collaboration with AOS (an Athenian Mountaineering Club). The municipality of Leonidio went on to finance additional new routing by experienced equippers such as the Remy Brothers.

Most crags are not situated directly above the town but are on the surrounding hillsides. The rock is highly-featured limestone, and climbing is enjoyable and varied: endless tufa columns, smooth crimpy walls, caves with stalactites, gray balancy walls. The concave red cliff face above Leonidio is the town’s natural shield against bad weather. Accordingly, Leonidio is possibly one of the best European destinations for winter climbing: the climate is very mild, rainfall is usually brief, and the valley basks in extended sunshine.

One of the most popular crags is Hot Rock, located on the left edge of Kokkinovrachos (the huge red face), with exceptional views of Leonidio and the sea. There are currently 18 routes graded mainly between 6b-7b.

From Leonidio, drive towards Vaskina village. The road ascends through a series of hairpin turns. Park at the 6th hairpin turn, about 2.9km from the main parking area of Leonidio (37.173218, 22.84611). Walk across a scree slope and follow the red marks to the big terrace. Walking time: 10 min.

No comments for Leonidio - Hot Rock