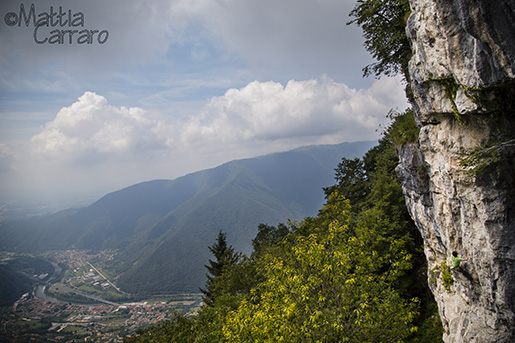 Campo Solagna (Grotta del Rodolfo), is a mid-sized crag located on the slopes of Monte Grappa at 1000 meters above sea level, set in a dense forest of beech, hazel and nut trees. The vegetation and undergrowth are still fairly young, unfortunately during the First World War the brigade that occupied this portion of land burned and felled the entire forest to improve the view in case of an attack by their enemy.

The crag's history dates back to the early 90's, to Paolo Bessega and Stefan Bortoli who climbed the first routes and then passed the baton on to the tireless trio composed of the two brothers, Stefano Casarotto, Momi Casarotto and Sergio Boato. These three did an excellent job of bolting, climbing, and consolidating the pockets and crimps all at their expense, often exposing themselves to criticism and even some sad episodes of sabotage ... (along the lines of: those who know how to do things, do things, those who don't, instruct...). More recently Gianluca Cogo and Luca Bergamin have lent a hand at bolting the crag.

The crag is composed of grey limestone on the sides, while in the middle this changes to a pocketed conglomerate. The style of climbing varies and endurance is undoubtedly the name of the game here. The crag reaches a maximum height of 20m and offers steep roofs, 40° overhangs and slabs and even the holds vary considerably from pockets and crimps to slopers and tufas.

Climbing takes place all year round; in winter on clear sunny days during the warmest hours, all day long in spring and summer until the end of July as the sun never reaches the entire face. From August onwards though it's best to avoid the midday sun.