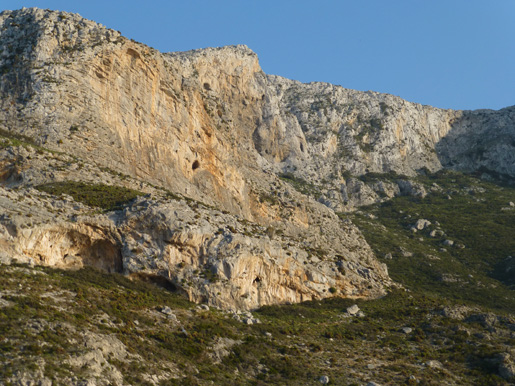 This new crag hosts more than 30 fantastic routes in magnificent surroundings. The number of exceptional routes is unusually high even by Kalymnos standards and some are the most beautiful on the island of their grade. The routes are very long and slightly overhanging and while some moves are on sharp rock, most of the climbing is extremely pleasant up large pockets and wide tufas.

From Kalymnos take the boat to Telendos, from the harbour follow the pretty trail along the coast towards Irox (50 min). Traverse along the foot of the cliffs and, when the sector Irox ends, ascend briefly to the right (total time: 60-65 min). Alternatively, you can approach Irox by boat and ascend briefly to the right (only 10 min). From Irox continue past Pescatore and follow the blue markers for 25 minutes

This sector was sponsored by Hotel Simi Zermatt. More than 400 bolts and the belays were donated by the Glaros Bolt Fund. Almost all routes were put up by Markus Leippold and Urs Odermatt except for 1. (Kathi Schefer), 2. (Paul Ziegler) 29 - 31 (Yuri Wright). 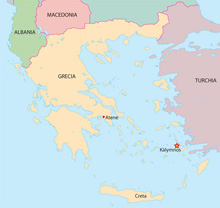 The crag remains in the shade until 14.00. It is often windy in the afternoons. Lambda is ideal in summer, combined with the crags Glaros and Irox.

For many routes an 80m rope is obligatory. Take 18 -24 quickdraws, depending on the route.