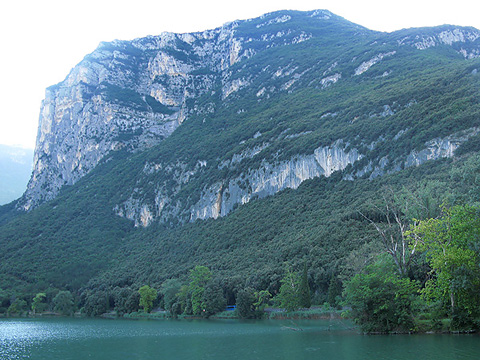 Bassilandia is a beautiful crag dedicated to the late Roberto Bassi, located above romantic Lake Toblino and surprisingly never too crowded. Developed initially by Fabio Leoni, the untiring local describes it as follows:

"I began to bolt Bassilandia on my own, risking a fair bit since it's part of a biotope. After having established numerous routes and pruned the trees perfectly in accordance with the forest warden, seeing the crag's potential I asked for help fro other climbers, including Rolando Larcher, Michele Cagol, Guido Dalfovo and Marco Curti, who all helped create one of the most best crags in the Sarca Valley.

Before I bolted the crag there were two routes, one which climbed the giant tufa (with some chipped holds...) and one on the slab by unknown climbers. The hardest pitches were equipped and freed by Guido Dalfovo, a talented climber with fingers of steel.

The crag offers technical and sustained climbing on a 30m high face and, apart from the extremely hot summer months it's possible to climb all year round, by either following or avoiding the sun. Watch out for the car park below, as thieves often operate here: don't leave anything in the car, or park at Sarche. From here a short walk, which starts from the garage close to a large tree, leads in 15/20 minutes to the crag."

From Arco take the SS45bis towards Trento, circa 1 km after Sarca park on the left in the layby, beneath the barrier which protects against falling rocks and before reaching the castle. Take the path which starts from the protection barrier and ascend quickly to reach another path which coasts the hillside. Follow this rightwards for about 400m, then turn up left following red markers to reach the crag.

The climbing is both technical and sustained.

Hotels, B&B's and camping in Arco.

No comments for Arco - Bassilandia

Trekking backpack Farpoint Trek 55 is the perfect rucksack for...